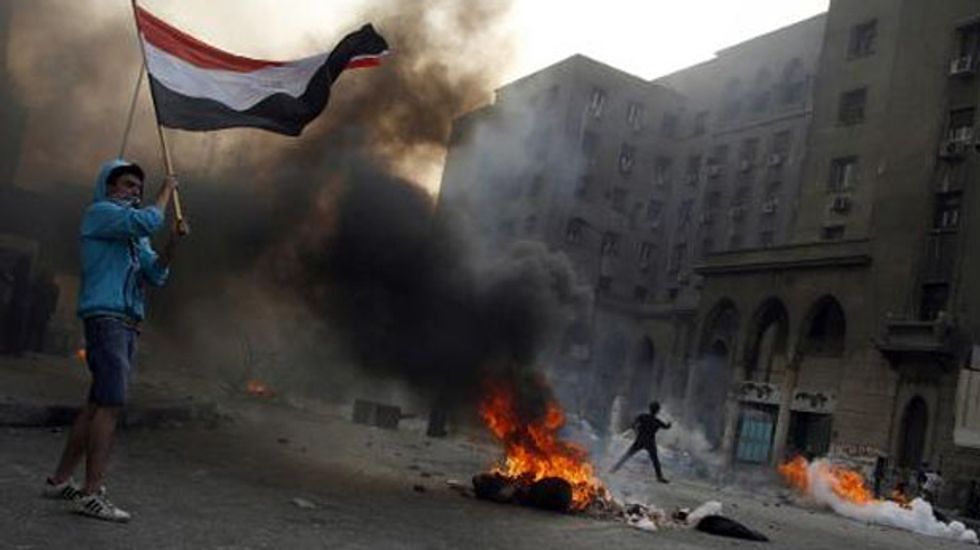 The Egyptian health ministry said at least 57 people were killed nationwide on the day of the bloody crackdown, including 48 in the capital.

Quoting witnesses, Amnesty said that in some instances, security forces stood by as men in civilian clothing used firearms, knives and swords to attack the Islamist demonstrators.

On October 6, security forces clashed with pro-Morsi crowds in Cairo as they tried to reach the capital's Tahrir Square where supporters of the military were celebrating the 40th anniversary of the Arab-Israeli war.

"The Egyptian security forces patently failed to prevent the loss of life. In a number of cases bystanders or non-violent protesters were caught up in the violence," Amnesty's Hassiba Hadj Sahraoui said in a statement.

"Although some pro-Morsi protesters threw rocks, burned tyres and used fireworks or other incendiaries against security forces and local residents, the security forces... resorted to the use of lethal force when it was not strictly necessary."

Amnesty said no members of the security forces were killed during the clashes.

The clashes were the deadliest since security forces stormed two Cairo protest camps of Morsi supporters on August 14, leaving hundreds of people dead.

Amnesty said the worst bloodshed was in the Cairo district of Dokki, where 27 people died as a result of live rounds and three from shotgun pellet wounds.

At Dokki, the security forces used "teargas, shotguns and live ammunition against protesters attempting to reach and cross a bridge leading to Tahrir Square," said the London-based watchdog.

"One bullet went straight through me and hit the man standing behind me," a 16-year-old schoolboy who was shot in the arm and leg was quoted as saying by the watchdog.

"There was heavy teargas lingering in the air, and bullets whizzing by...people were running away, and security forces were chasing them... We ran with the crowd, people were falling around us," said Umm Sara, another pro-Morsi supporter.

Calling for a full and impartial investigation, Hadj Sahraoui said the "Egyptian security forces have an abysmal track record of using disproportionate force during protests."

"The authorities' utter disregard for international standards on the lawful use of force suggests that they are prepared to crackdown on Morsi supporters at any cost."

Egypt's military-installed authorities have been waging a campaign to crush Islamist supporters of Morsi since the storming of the two Cairo camps on August 14.

More than 1,000 people have been killed in the crackdown, and 2,000 Islamists have been detained. Morsi himself is being held at an unknown location after the army toppled him on July 3.

A man who twice voted for President Donald Trump is now offering an apology while admitting that he should have taken warnings about the president more seriously.

Hunter Baker, the dean of arts and sciences and professor of political science at Union University, writes at the Public Discourse website that he supported Trump in 2016 and 2020 because he believed that Trump would be far better for protecting American Christians' religious liberty than either Hillary Clinton or President-elect Joe Biden.

Pro Publica
More than 10 million people have seen the video shot by HuffPost reporter Igor Bobic showing a Black Capitol Police officer leading pro-Trump rioters away from where senators were holed up in the Capitol on Jan. 6.