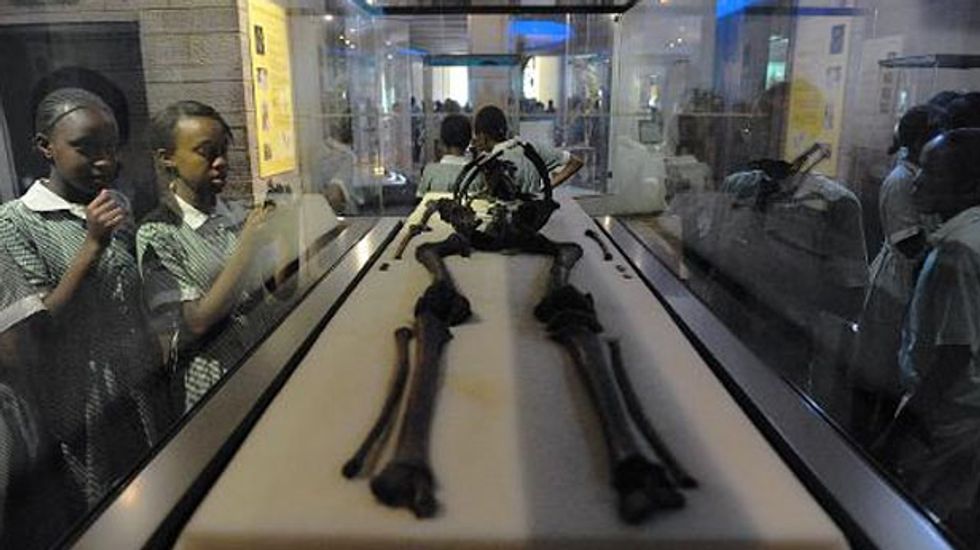 For deeply religious Kenya -- dubbed the 'cradle of mankind' for the wealth of early hominid fossils dug up from its soil showing man's evolution -- the famous remains challenge literal teachings of Christianity, Islam and traditional beliefs.

While across the world teachers must juggle science and religion, the fossils of Kenya provide stark examples found in few nations elsewhere.

"There have been challenges in teaching evolution... largely because of the religious teachings on creation, which are deeply entrenched," said Fredrick Kyalo Manthi, head of the paleontology section at National Museums of Kenya.

Such teachings "tend to disregard the scientific explanation that all biological species, including humans, have generally evolved from simple forms to complex forms," he added.

In the museum in the capital Nairobi, school children troop past world famous early human or hominid remains, the oldest of which goes back 18 million years.

"It's a challenge," admitted primary school teacher Manasseh Maina, leading a cheerful class of children through the museum, stopping to stare at the fragile ribcage of "Turkana Boy", one of only two nearly complete skeletons of hominids in the world.

A plaque proudly calls the fossils "the single most important collection" in the world, noting patriotically that all were discovered in Kenya.

Eastern Africa's great Rift Valley, that comes from Tanzania to the south through the heart of Kenya and on northwards into Ethiopia, has provided key fossils that revolutionised scientific understanding of mankind's evolution.

"When you start explaining evolution to children, if you don't have concrete things it can seem very unreal," Maina added. "But it also contradicts what the Bible says on how God created the world."

In Kenyan schools, God's creation of Adam from dust and Eve from his rib -- as described in the Bible's Book of Genesis -- is taught in religious studies.

But in science and history classes, children learn of Darwinism and evolution, the evidence of which they see as they stare at the fragile bones.

"It's like there is a contradiction somewhere, but we like learning about both evolution and the Bible," said Joy, a 14-year-old pupil, as she and her classmates dressed neat green uniforms crowded around one of the many skulls on display.

The fossils have proved controversial.

Tempers flared in 2006 and 2007 when Bonifes Adoyo, a bishop at the head of a several-thousand strong evangelical congregation, led a campaign to restrict access to some of the most impressive examples.

His move prompted an angry reaction from leading paleontologist Richard Leakey, a long-time director of Kenya's museums, who called the proposal "outrageous".

He argued the museums' authority should present "a very forceful case for the evolutionary theory of the origins of mankind" as its early fossil collection is "one of Kenya?s very few global claims to fame".

He argued that traditional tribal beliefs, often blended with Christian or Islamic traditions, create a complex picture that temper literal creationist interpretations which hold that God created the world in a few thousand years.

Evangelical churches in Kenya are powerful -- similar in the US, where creationism is gaining ground -- but their leaders are still keen to downplay major divisions.

"I don't think there's ever been a serious conflict to the point where anyone has challenged the curriculum," said Ann Mwalili, who founded Green Pastures Tabernacle Church in Nairobi, told AFP.

Kenyan children also learn local versions of creation, including beliefs that mankind rose up out of an anthill.

The Kikuyu people believe that the creator -- sitting on snowcapped Mount Kenya -- made man and gave him nine wives, while the cattle-herding Maasai say their cows were lowered from the sky on a rope when heaven and earth split.

Today, teachers like Maina said he and his colleagues simply present all the possible versions to their pupils.

Some schools spend as many as 10 hours on the road for a one-day visit to the national museum, with children rising hours before dawn. Roads around the museum are often crowded with buses.

"It's so useful for them to see these Stone Age men," beamed Albert Mwanthi, an elderly teacher from Makueni, some 200 kilometres (125 miles) away, waving at a reconstructions of early man hunting and then killing animals with stones.

"If only this sort of exhibit could be extended across the country."