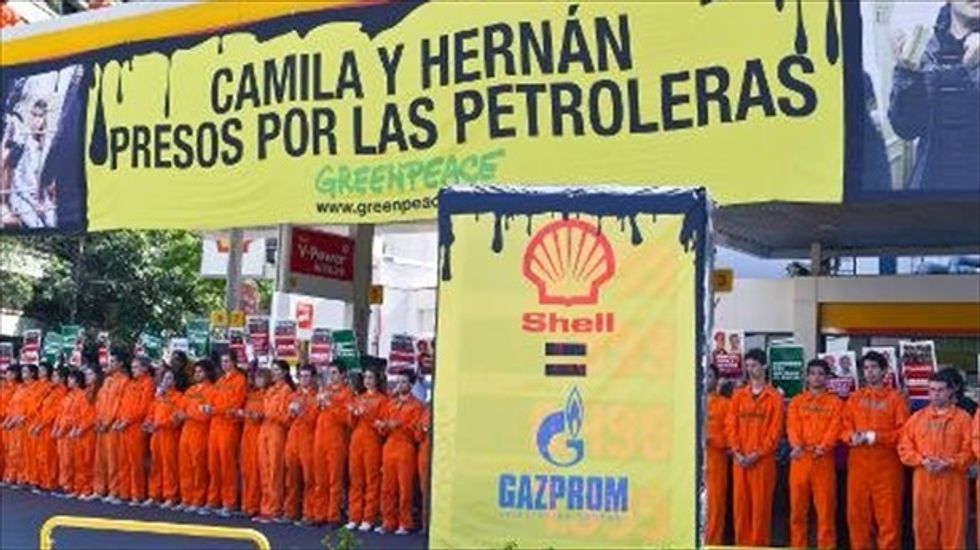 A picture released by Greenpeace shows protesters demonstrating in demand of the release of 30 Greenpeace activists placed in pre-trial detention by the Russian government, in Buenos Aires on Oct. 18, 2013. [AFP]

Four demonstrators scaled the station's roof in Buenos Aires, while 30 of them wore handcuffs to express solidarity with the 28 activists and two freelance journalists who are under arrest in Russia.

"Camila and Hernan, prisoners of the oil companies," read a banner in support of Camila Speziale, 21, and Hernan Perez Orsi, 40, two Argentines in Russian custody.

The Russian authorities charged the 30 Greenpeace members with piracy, which carries a maximum sentence of 15 years.

They were aboard Greenpeace's "Arctic Sunrise" ship when they staged a protest against Shell's oil drilling in the Russian Arctic last month.

The activists from 18 countries have been placed in pre-trial detention in the port city of Murmansk in northwest Russia, where their lawyer has said they must endure "inhuman conditions."

"The real crime is to drill for oil in the Arctic and continue to use fuels that cause climate change," said Hernan Nadal, Greenpeace's director for public action in Argentina.

Friday's protest was part of a global day of action, with demonstrators in 36 cities calling for the activists' release.