Arrr!-cheologists come upon the booty from Blackbeard's ship 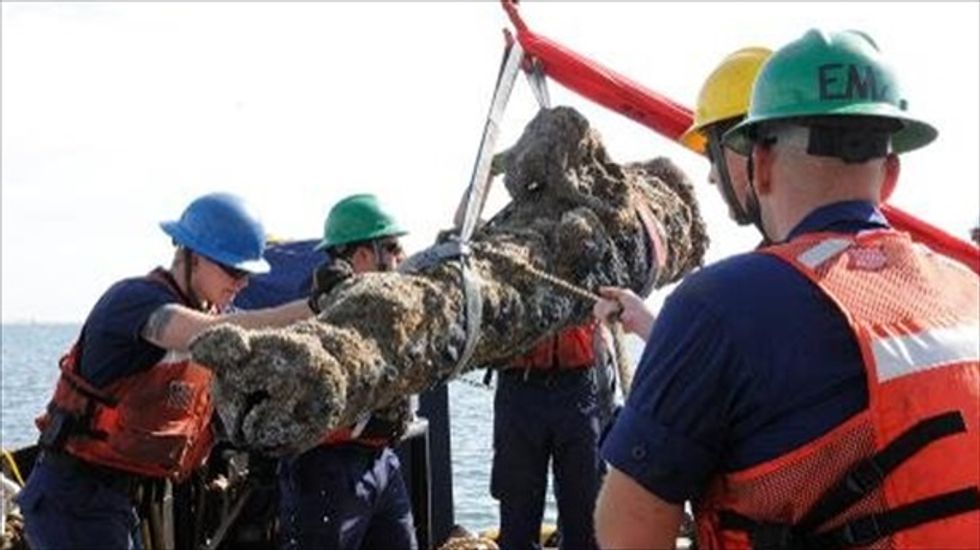 Members of the U.S. Coast Guard and others raise a cannon from a sunken ship on Oct. 28, 2013 off the coast of North Carolina. [AFP]

Five large cannons from a sunken ship captained by the legendary pirate Blackbeard have been recovered by US archeologists, authorities confirmed Wednesday.

The cannons were raised from the wreck of the Queen Anne's Revenge, sunk off the coast of North Carolina, on Monday, state officials said.

The cannons, four of which weighed between 900 and 1,360 kilos (2000 to 3000 pounds), were excavated by a team attached to the North Carolina Department of Cultural Resources.

Project Director Billy Ray Morris said the largest of the cannons was believed to have been made in Sweden.

"We think the largest of the four cannons may be of Swedish origin since the only other recovered gun this size was made in Sweden," Morris said.

"We also hope to recover two large concretions each the size of a twin bed. They may contain barrel hoops, cannon balls and other treasures.?

Authorities in North Carolina have so far recovered an estimated 280,000 artifacts from the site.

Blackbeard, whose real name was Edward Teach, achieved infamy during the early part of the 18th century when he terrorized Atlantic seafarers around the Caribbean and the American colonies.

The Queen Anne's Revenge, which was discovered in 1996, was intentionally run aground in 1718.

Blackbeard was killed in a battle with British forces later that year.