Australian firefighters brace for the worst in a wildfire 'flare up' 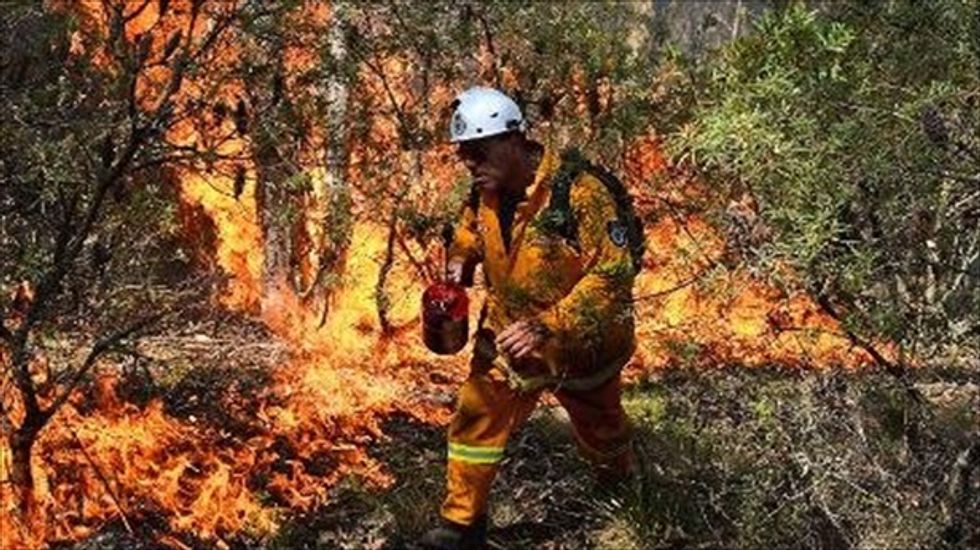 Firefighters in Australia braced for hot, dry winds and soaring temperatures Wednesday with lightning also posing a problem as they battle to prevent a week-long bushfire disaster getting worse.

As the crisis entered its seventh day, 59 fires were raging across the state of New South Wales with 19 of them uncontained and warnings again issued for people to leave their homes or be extra vigilant.

"On days like today, minutes really matter," NSW Rural Fire Service Commissioner Shane Fitzsimmons said, with the focus again on the Blue Mountains region west of Sydney, a popular tourist area home to 75,000 people where three huge infernos have been out of control for days.

So far more than 120,000 hectares (296,500 acres) of land has been burnt across the state and more than 200 homes destroyed. But only one person has died as residents heed advice to either flee or head to evacuation centres.

Temperatures were heading towards the mid-30 degrees Celsius range Wednesday and coupled with low humidity and forecast wind gusts of up to 100 kilometres (62 miles) per hour, the fire chief called the conditions "as bad as it gets".

Drizzle fell overnight but it only hampered the mostly volunteer crews fighting the blazes.

"Whilst that is some welcome relief in terms of moderating the current fire behaviour, it has compromised considerably the ability to continue with the backburning operations that were planned throughout the evening," Fitzsimmons said.

Backburning is a tactic aimed at creating firebreaks to control the path of blazes.

This has been a key focus of operations ahead of Wednesday, which authorities fear will be the toughest day so far.

The light rain meant many firefighters had to be withdrawn from forest trails due to fears that their trucks could get bogged down.

Much of the dampness has already dried out and Fitzsimmons said: "It's only a matter of hours before we see a flare up of fire activity."

While the Blue Mountains is the main concern, fires are breaking out across the vast state with reports from Broken Hill in the north of lightning strikes sparking new blazes.

"What can't be denied is there is something like 1,600 kilometres (992 miles) of fire perimeter that we're dealing with. Now, that's all active to one degree or another," said Fitzsimmons.

"Noone knows where that fire activity will stir up under today's weather."

NSW Premier Barry O'Farrell drove home the message, saying regardless of what happens on Wednesday "we're not out of the woods yet".

"We hope of course that today's conditions, today's potential events do not occur. As the commissioner has said repeatedly, we've planned for the worst, but we continue to hope for the best," he said.