Bomb kills 27 in Syria as U.S. presses for peace talks 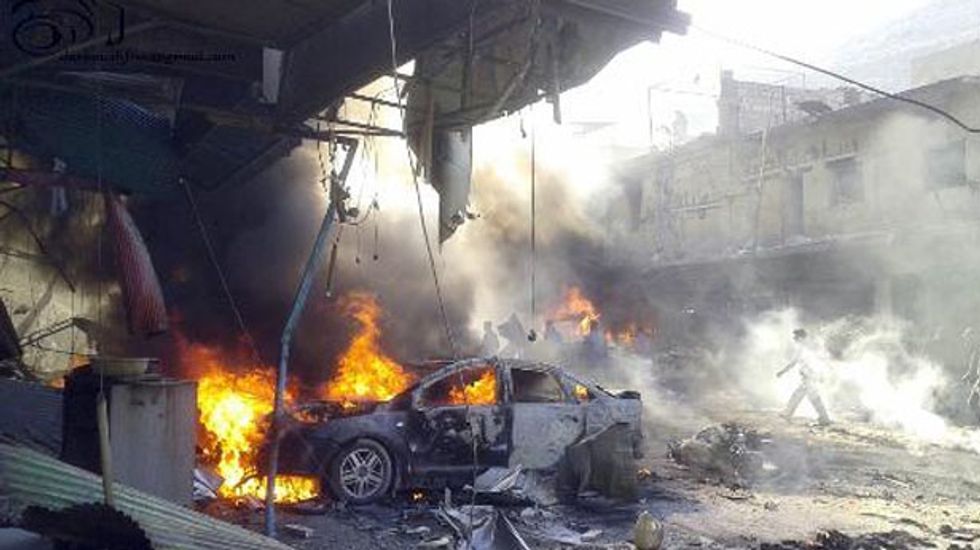 A powerful car bomb killed at least 27 people in northwestern Syria on Monday as the United States pressed for peace talks despite widening rifts among the fractured opposition.

The attack in a rebel-held area of Idlib province near the Turkish border came the day after gunmen abducted seven Red Cross aid workers in the same increasingly lawless region.

Four of the kidnapped aid workers were freed "safe and sound" on Monday, Red Cross spokesman Ewan Watson told AFP, adding that the group was awaiting further information about the others.

The blast in the town of Darkush killed at least three children, the Syrian Observatory for Human Rights said, adding that the death toll could rise because many of the wounded were in serious condition.

Activists said the blast targeted the market area of the town, which is a few kilometres (a couple of miles) from the border with Turkey, on the Orontes river.

The six members of the International Committee of the Red Cross and a member of the Syrian Red Crescent were kidnapped by "unidentified armed men."

The ICRC has not commented on the nationality of those abducted, though it had earlier said that most of the group were Syrian. There has been no claim of responsibility.

Rebels control large swathes of Idlib, and kidnappings have become increasingly common in rebel-held parts of Syria, targeting both journalists and aid workers.

The Red Cross, a rare aid group working on both sides of the conflict, said the team had travelled to Idlib on October 10 to assess the situation at health facilities and deliver aid.

"We don't have any intention of stopping our activities in Syria, but of course this situation makes us reflect and take a close look at our operations," Watson had earlier told Swiss radio.

Another ICRC spokesman, Simon Schorno, told AFP that staff members had been held for a "matter of hours" in an incident in Syria earlier this year.

But Sunday's incident appears to be the first time the organisation's members have been kidnapped in the country.

On the political front, the United States said there was an "urgent" need to set a date for so-called Geneva 2 peace talks, despite the rejection of the process this week by a leading opposition group.

"We believe that it is urgent to set a date to convene the conference and work toward a new Syria," US Secretary of State John Kerry said after meeting UN-Arab League envoy Lakhdar Brahimi in London.

President Bashar al-Assad "has lost the legitimacy necessary to be able to be a cohesive force that could bring people together," he said.

"There has to be a transition government... This will require all the parties to come together in good faith."

Russian Foreign Minister Sergei Lavrov had earlier called on Washington to bring the Syrian opposition to the talks proposed for mid-November.

The call came a day after the Syrian National Council (SNC) -- a key component of the National Coalition recognised by most Arab and Western governments -- ruled out attending any Geneva peace talks, and said it would quit the umbrella group if it participated.

Washington threatened military strikes in response to August 21 sarin gas attacks in the Damascus suburbs that killed hundreds of people, but the punitive action was averted by a US-Russian deal under which Syria is turning over its chemical arsenal for destruction.

SNC chief George Sabra said his group would boycott the Geneva talks because the international community had failed to punish the gas attack or address the plight of civilians in neighbourhoods besieged by regime troops.

On Sunday, the ICRC said it and the Syrian Arab Red Crescent (SARC) had evacuated 3,500 people from one such Damascus neighbourhood, Moadamiyet al-Sham, over 24 hours.

Most were women and children "in a state of major fatigue and were very scared," SARC head of operations Khaled Erksoussi told AFP.

Moadamiyet al-Sham was targeted in the August 21 sarin attack, which the opposition and Western governments blame on Damascus. Assad has denied his forces were responsible.

Experts sent by the United Nations and the Organisation for the Prohibition of Chemical Weapons have begun verifying and destroying Syria's chemical arsenal.

The joint team of 60 experts and support staff have been in Syria since October 1, carrying out the terms of a Security Council resolution enshrining the US-Russian deal.