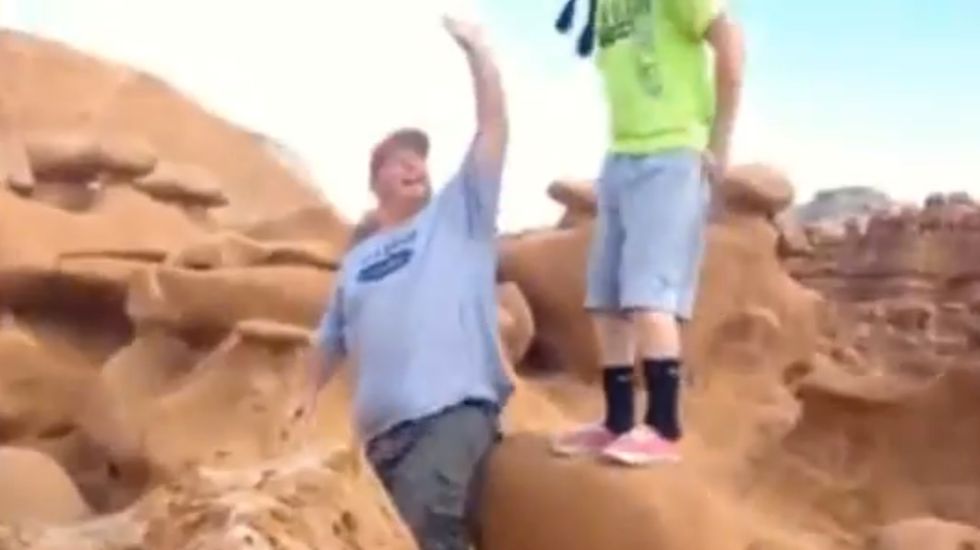 Two US scout leaders say they have received death threats after a video of them toppling an age-old rock formation in the western state of Utah went viral online.

The pair, who celebrated by doing high fives after the rock fell, insist they pushed it because it was loose and they feared it could topple onto a visitor to the park.

But facing possible felony charges, they admit they probably should have found a park ranger before taking action themselves, whether filmed or not.

"I think we made the right decision, but probably the wrong method," Hall said, according to the Salt Lake Tribune. "We take full responsibility for whatever mistake we made, and we’re open to whatever that means from the state, from the Boy Scouts’ office, etc," he added.

The YouTube clip of the pair cheering and laughing, after Taylor used his body to lever the huge rock off, has been viewed around the world since being posted earlier this week.

"I’ve got over 100 death threats on the Internet already," said Hall.

"I’ve got people all over the world telling me they are going to kill me because I made the decision that lives are more important than this rock staying here a few more hours," he added.

They had been leading a small group of scouts in studying and playing amid the eerie and spectacular rock formations.

"This is not behavior that is appreciated or should exist in state parks," he told the Deseret News. "This has been formed for literally millions of years, and it's supposed to last for a long time.

"It doesn't need individuals doing the work of Mother Nature."

A Boy Scouts of America spokesman condemned the action.

"We are shocked and disappointed by this reprehensible behavior," spokesman Deron Smith said, cited by NBC news.

"The isolated actions of these individuals are absolutely counter to our beliefs and what we teach," Smith said. "We are reviewing this matter and will take appropriate action.”