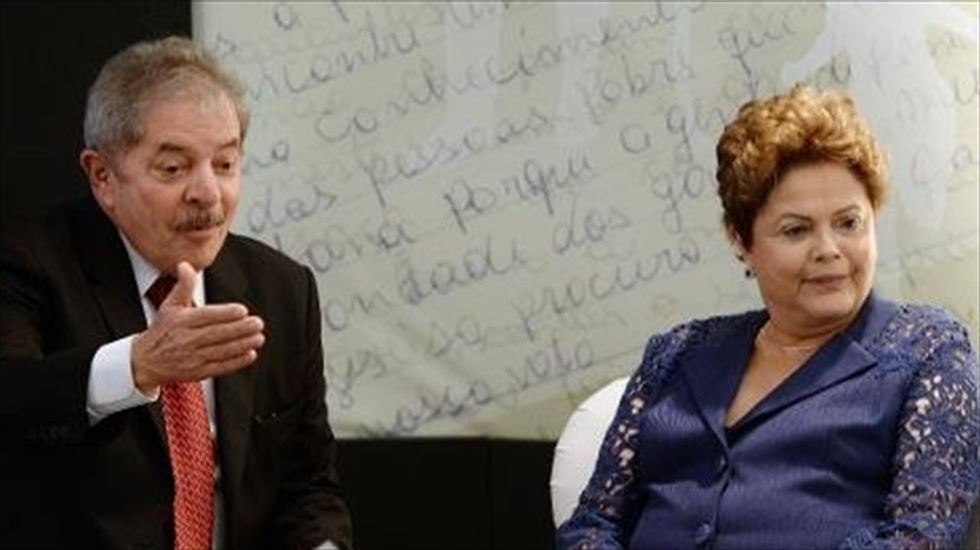 President Dilma Rousseff and her predecessor Luiz Inacio Lula da Silva on Wednesday feted the 10th anniversary of a landmark welfare program that lifted 36 million Brazilians out of poverty.

"Never have so many people been pulled out of poverty so quickly. 'Bolsa Familia' lifted 36 million people from extreme poverty," Rousseff, a former urban guerilla and Brazil's first woman president since January 2011, said.

She described the scheme as "the biggest social inclusion program in the world."

Lula, a former labor leader and metal worker who assumed the presidency in early 2003 as the world was debating war in Iraq, recalled: "My war was against hunger."

The popular ex-president, who was Rousseff's mentor, noted that money spent during the Iraq war "could have funded revenue transfers to 1.5 billion people around the world for 10 years."

Bolsa Familia is a cash transfer program that today provides 13.8 million families with a monthly allowance of between $16 and $150.

It benefits 50 million people, or one fourth of Brazil's population. One of the conditions for receiving it is that families must pledge to send their children to school on a regular basis.

"It was a very important program that serves the most vulnerable part of the Brazilian population," and amounts to only 0.5 percent of the country's GDP, said expert Jimmy Medeiros, of the private Getulio Vargas Foundation.

Rousseff, who is seeking re-election and leads in surveys for the balloting scheduled for next October, renewed her pledge to eradicate poverty.

Tereza Campello, the social development minister, said the government was trying to identify some 600,000 families still mired in extreme poverty.

Last week, the OECD said in a new report that Brazil may have cut the number of people living in poverty in recent years but inequality persists and better education is needed.

"Successful policies to spread the benefits of economic growth more widely have substantially reduced poverty and income inequality," the Organization for Economic Cooperation and Development said.

"Wider access to education has allowed more Brazilians to move into an expanding number of better-paid jobs.

"However, the quality of education has not kept pace with the impressive expansion of the system. There are severe shortages in physical school infrastructure."