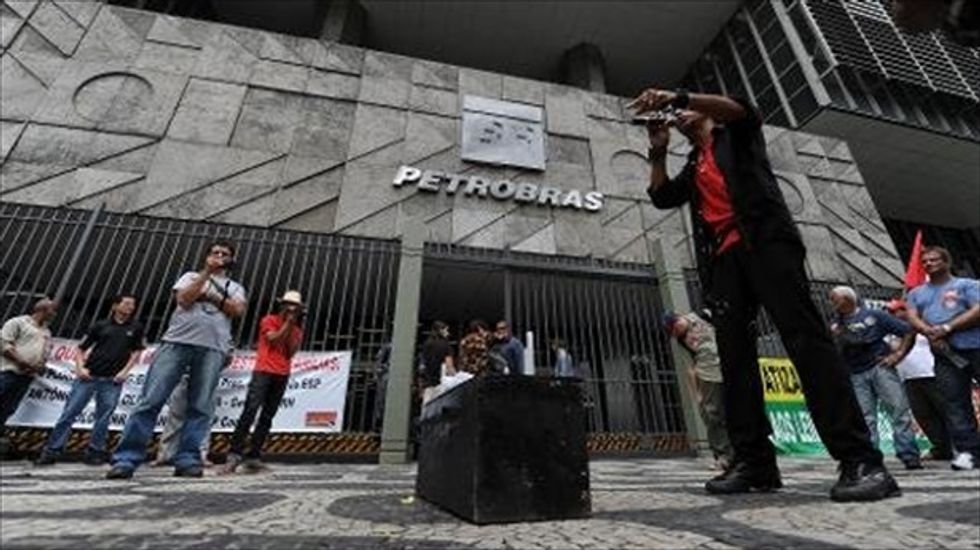 Oil industry workers demonstrate against a pre-salt auction for deepwater deposits, in front of Petrobras headquartes in Rio de Janeiro on Oct. 17, 2013. [AFP]

Workers walked off the job for a second straight day Friday at Brazil's state oil giant Petrobras to protest plans to open a major offshore oil field to foreign companies.

Bidding on the coveted Libra oil field opens Monday with 11 firms vying for a share of production. But Petrobras workers are angry that foreign and private companies are involved.

Union officials said some 90 percent of workers from operational units had heeded the strike call, adding there was "strong participation" from subcontracted and administrative staff.

Strikers want better conditions and additionally oppose the government's decision to allow foreign and private firms to bid on the concessions in the vast, deep water, "pre-salt" fields whose discovery off the coast of Brazil was revealed in 2007.

The National Oil Workers Federation on Thursday denounced the "losses the Brazilian nation will suffer if multinationals grab Libra."

Petrobras, the seventh largest oil company in the world, said it had a contingency plan to keep operations going and supplies flowing despite the strike, which affects some 40 platforms.

The company added it had met with union officials to discuss a collective work agreement dating from earlier this year and insisted it was open to negotiations.

US oil giants have shunned the auction, seeing too much state intervention with Petrobras granted sole operator status and a minimum 30 percent stake in any consortium under a 2010 law.

The auction will be the first since Brazil announced the discovery of the huge deep-water oil reserves off its southeastern coast, the country's biggest find in two decades.