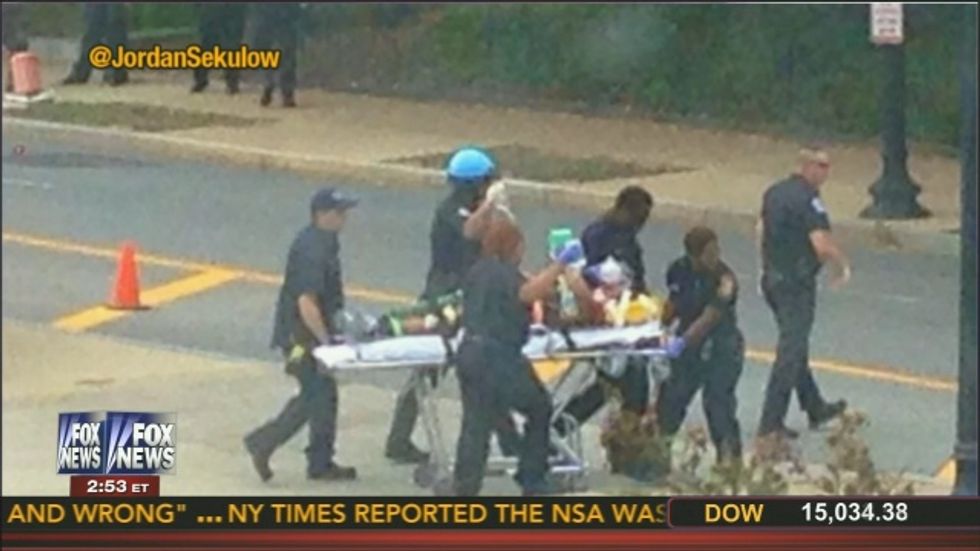 Police are scrambling after reports of gunfire at the U.S. Capitol. The nature of the disturbance is not currently known, but witnesses at the Capitol building describe a scene of mayhem.

Alex Leary of Leary Reports also took to Twitter with a photo of a tactical officer at a gun tripod, writing, "Something happening outside Capitol. Police running around with guns at ready."

At 2:25 p.m., the Associated Press reported that the entire U.S. Capitol and related facilities are on lockdown.

Raw Story will have more on this story as it develops.

UPDATE, 2:44 p.m.: NBC reported that one person is injured, a Capitol Police Officer who was injured in a vehicle crash.

UPDATE, 2:51 p.m.: NBC reported that witnesses said the event began with a car chase, a small black car that sped toward the Capitol with Capitol Police in pursuit. In front of the building there was an exchange of gunfire, then the car chase resumed.

The Capitol Police officer was injured in a crash that ended the second car chase. The officer has been airlifted by helicopter to be treated for his injuries.

UPDATE, 3:00 p.m.: Dana Bash of CNN reported that the lockdown has been lifted. She was with Senate Majority Leader Sen. Harry Reid (D-NV) and his staff when the alert was sounded.

UPDATE, 3:05 p.m.: Think Progress and other sources are reporting that the car chase began in front of the White House, then the black car sped toward the Capitol while exchanging gunfire with police.

Police said that multiple individuals may have been injured.

UPDATE, 3:14 p.m.: NBC's Pete Williams confirmed that the disturbance began with a black car rushing the White House. National Park Police pursued the vehicle, which next came to a stop in front of the Capitol Building, where gunfire was exchanged.

UPDATE, 3:25 p.m.: ABC News reported that a young child was found unharmed in the suspect's vehicle. The vehicle had out-of-state tags. The woman was not carrying any ID.

UPDATE, 3:39 p.m.: Capitol Police Chief Kim Dine confirmed at a press conference that shots were fired, but that the injured Capitol Police officer was not injured by gunfire. The woman was not carrying ID and no weapons were found in her vehicle.

UPDATE, 3:58 p.m.: Senate Sergeant-at-Arms Terrance W. Gainer confirmed to the Washington Post that the child from the black vehicle was taken to the hospital.

Watch a portion of the police chase, broadcast on Fox News:

Watch a Bloomberg News update about the incident, embedded via NDN:

Watch a CNN report from 3:00 p.m. Thursday, embedded below via NDN: