Can your baby DJ? They can in New York 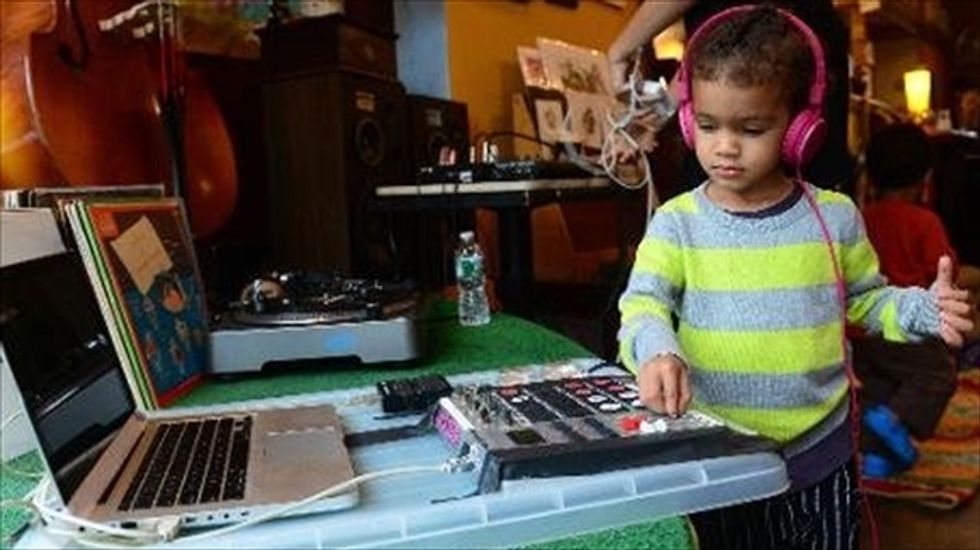 A toddler takes part in a 'Baby DJ School' class, aimed at preschool children to learn the basics on how to mix music, in New York, Oct. 7, 2013. [AFP]

If baby yoga seems so yesterday and Twinkle, Twinkle Little Star so last century, then the newest craze among trendsetter New York parents is for you: Baby DJ School.

DJ, composer and playwright Natalie Elizabeth Weiss is offering an eight-week program to teach babies hip-hop, how to mix their own music and play air guitar with the best of them.

And her clients? Professional families in Brooklyn, New York, one of the most competitive cities in the world where wealthy parents are notorious for lavishing cash and attention on their progeny's early development.

"Parents love it. They freak out. They all want to bring their friends. It's growing so quickly," Weiss told AFP.

With songs such as "That's Why Daddy Loves Disco," and modern DJ equipment, she teaches tots under three about electro, hip-hop and house; how to play records, match beats and create funky samples.

Some smile and look excited. Their parents push their children's arms up and down in time to the beat.

"Baby DJ, you got to get up if you wanna get down," croons Weiss.

She believes nursery rhymes -- such as Twinkle Twinkle Little Star and Baa Baa Black Sheep, which basically have the same melody -- are not challenging enough.

Instead she offers babies rhythm, and the chance to play with mixing songs.

"They're like geniuses -- just because they can't say what they're learning doesn't mean they aren't," she told a local television network before the class.

The children certainly love pressing the buttons and pushing the slider on her DJ deck, but in a 45-minute class, not all the kids look convinced at all times.

"Let's try the disco arm move," cries Weiss, jabbing her arm diagonally into the air and down to the side.

One toddler picks his nose and another chucks a record on the floor.

But the parents are hooked, clapping on the beat and jiggling their hips.

"It's kind of a combination of exploring the world, and physics and music," she enthuses.

If her daughter is too young to start traditional music lessons on a violin or piano, Baby DJ School is perfect.

"This is much more like sliding and pushing and it makes a lot of sense. You're using someone else's tools for them to make their own music," Langsfeld says.

Ellie loves the classes, she adds, noting: "She definitely gets her little moves on."

"People take their kids to go swimming... there could be worse things that a baby could do at this age.

"I don't know if this is going to be his profession when he grows up, but hey, it's all about exposing your children to as many things as possible."

Weiss, who has taught experimental electronic workshops to older children, got the Baby DJ School idea when she showed a friend's tot how her equipment works.

The boy is now one of the more enthusiastic class members.

"(I) whipped it out, showed him the basics -- he picked it up like that," she told AFP, clicking her fingers.

"He's already working with buttons, knobs and levers in all his toys. It's not any more complicated to move a volume knob up than it is to move a train across the tracks on a little wooden train set."

"Young children are typically very good at identifying what sort of activities best suit their developmental needs," she told AFP in an email.

"There is a lot of learning potential in musical play, including DJing if a kid shows interest and someone is willing to offer their equipment to a toddler."