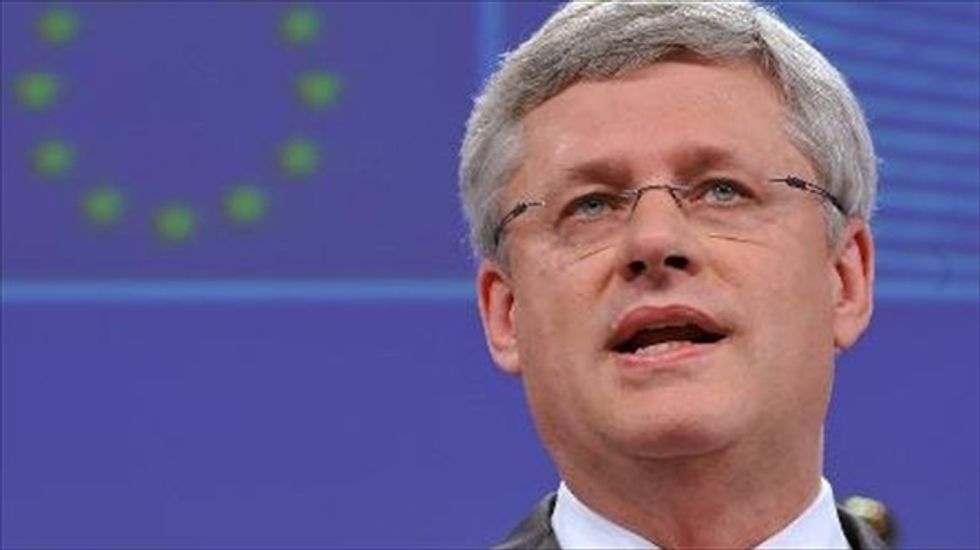 Canadian Prime Minister Stephen Harper on Wednesday strongly refuted accusations linking him to a Senate expenses scandal that has been a drag on his Tories' popularity and the Senate.

Harper and the Senate Conservative leadership were loosely implicated the previous day by a senator at the centre of the scandal, Mike Duffy, in alleged "bribery, threats and extortion of a sitting legislator."

Duffy also accused the prime minister's office of a "monstrous political stunt" to try to get the expenses scandal off the front pages of newspapers -- which opponents labelled an attempted cover-up.

As well he said he was threatened with expulsion if he did not go along.

Harper in the House of Commons flatly rejected Duffy's claims, one by one, in answers to opposition questions.

"You cannot claim an expense you did not incur. That is not right, that is not proper and that will not be tolerated in this party," Harper summarized.

His stance was in stark contrast to the previous day when Harper appeared to dodge questions about the affair.

The scandal began with a series of articles and newscasts last December critical of Duffy for claiming a housing expense for a cottage in his home province of Prince Edward Island while he lived primarily in Ottawa.

Duffy said he was personally ordered by Harper to "pay back the money."

But he resisted, arguing that his expense claims were within the rules -- which many have since argued are too vague.

"To pay back money I didn?t owe, would destroy my reputation," Duffy said in the Senate on Tuesday.

The expense is typically available to senators who live outside Ottawa but must maintain a second home in the capital, for work.

"The problem is not with Senator Duffy. It's with the existing rules," Duffy's lawyer Donald Bayne argued.

Regardless, the spending was not sitting well with voters, including the Tories' supporters and so the prime minister's office concocted a scheme to repay the Can$90,000 in expenses, Bayne explained.

Duffy said he eventually went along because it would also mean that he would not be censured. "I would not be audited by Deloitte... I would get a pass," he said.

The scheme is now being investigated by federal police after Harper's chief of staff, Nigel Wright, revealed in May that he gave Duffy the money to repay the funds.

Duffy and two other Conservative senators -- all three appointed by Harper -- meanwhile were sacked from caucus over what an audit revealed were "troubling" expense claims.

Now the Senate is considering suspending them without pay for what their peers called "gross negligence," but Duffy through his lawyer called it a "mob hunt."

In the corridors of Parliament, opposition leaders meanwhile attempted to rest the blame on Harper.

If Harper knew about the Can$90,000 cheque and is charged criminally, he would be forced to step down.

The New Democratic Party -- the only party without representation in the Senate -- wants the Senate abolished. The other two main political parties have called for reform of the Senate.

"A leader takes responsibility when things go wrong and this prime minister has consistently avoided taking any responsibility for this sordid mess," Liberal leader Justin Trudeau told his caucus.

Harper countered: "Any assertion that I was in any way consulted or had any knowledge of Mr. Wright's payment to Mr. Duffy is categorically false. Had I known about it, I would not have permitted it. As soon as I knew about it, on May 15, I revealed it to the public."

A fourth Liberal Senator who retired in August, meanwhile, was accused by the Royal Canadian Mounted Police in court documents filed on Wednesday of "fraud" over his expense claims.

No charges have been laid.