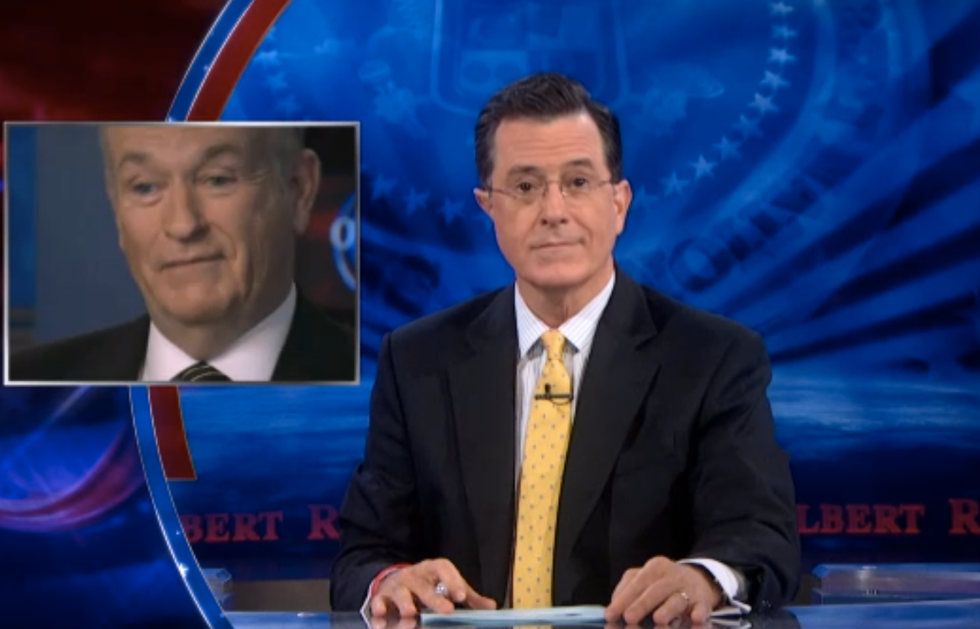 Wednesday night on "The Colbert Report," host Stephen Colbert paid tribute to his "mentor, hero, inspiration and safe word," "Papa Bear" Bill O'Reilly, who said that that Holy Spirit ordered him to write a book about Jesus that was more accurate than the New Testament of the Christian Bible.

You don't become a great American, though, said Colbert, without making some enemies, which is why the segment is called "Blood in the Water." O'Reilly is under attack over his new book, Killing Jesus.

In an interview last Sunday with "60 Minutes," O'Reilly said, "All of the ideas come to me in the middle of the night. One night, I just woke up and went 'Killing Jesus.' I believe that it's because I'm in contact...that comes from the Holy Spirit."

"Yes," Colbert explained, "as a Catholic, Bill believes in the Holy Trinity; in this case, the Father, the Son and the Holy Ghost-Writer."

"Of course the mainstream media immediately attacked O'Reilly from all sides," said Colbert, which actually means "one guy in the Philadelphia Inquirer," who O'Reilly accused of mocking his Christian faith.

"That's right," said Colbert, and in O'Reilly's Christian faith, "Rule Number One is 'No forgiveness, motherf*cker!'"

Colbert concluded, "Jesus himself said, 'If you cross me, I'll cut a bitch!'"