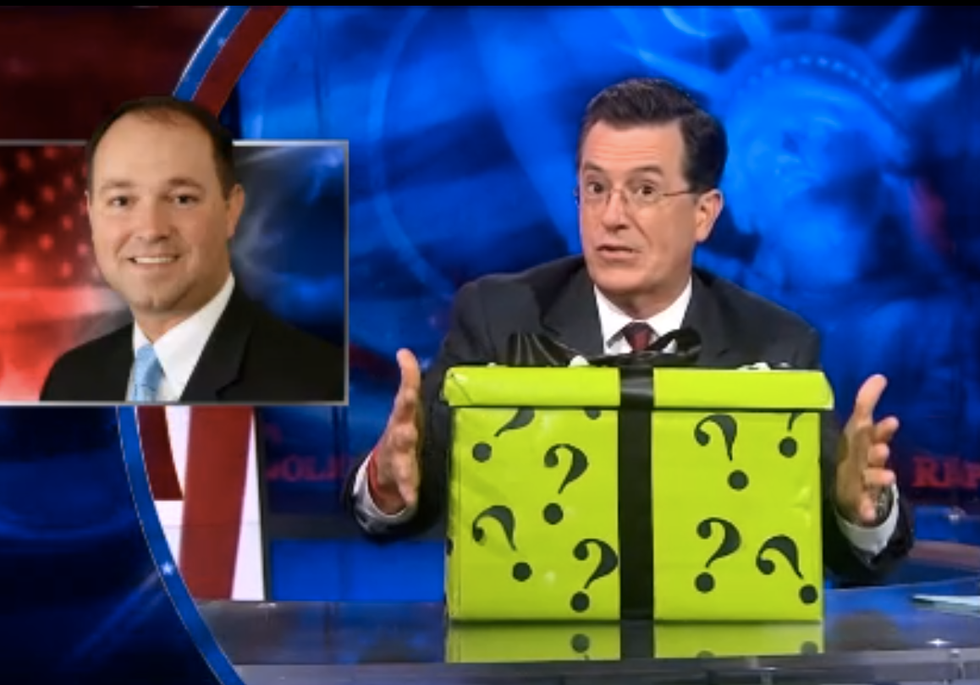 "Now, Nation," began Colbert, "it is now Day Three of the government shutdown and it is a critical moment in our nation's history, and not just because yogurt left by furloughed federal workers in break room fridges are passing their expiration dates."

He reported that on Thursday, President Barack Obama invited a bipartisan Congressional delegation to the White House to try and hammer out a deal to reopen the government. After more than an hour, both sides emerged with no deal and no signs of any progress.

Colbert moved on to the now-notorious remarks of Rep. Marlin Stutzman, who said that the Republicans "are going to get something out of this. And I don't know what that even is."

"Hear that, Mr. President?" said Colbert. "A clear signal of what Obama needs to offer...something."

"Just tell Republicans," he suggested, "if they agree to end this impasse, they can get whatever's in this secret mystery box!"

He picked up a large, gift-wrapped box covered in question marks, shook it, and said, "I mean...what could it be? The complete dismantling of Obamacare? The Keystone XL pipeline? Or is it a lovely dinette set courtesy of Broyhill?"

"Act now, Republicans, and the president will throw in whatever's behind his curtain," he said, giving the middle finger with one hand and shielding it from the camera with the other.