Colbert on trucker protest: We're going to 'deliver a truckload of Kenya back to his home 10-20' 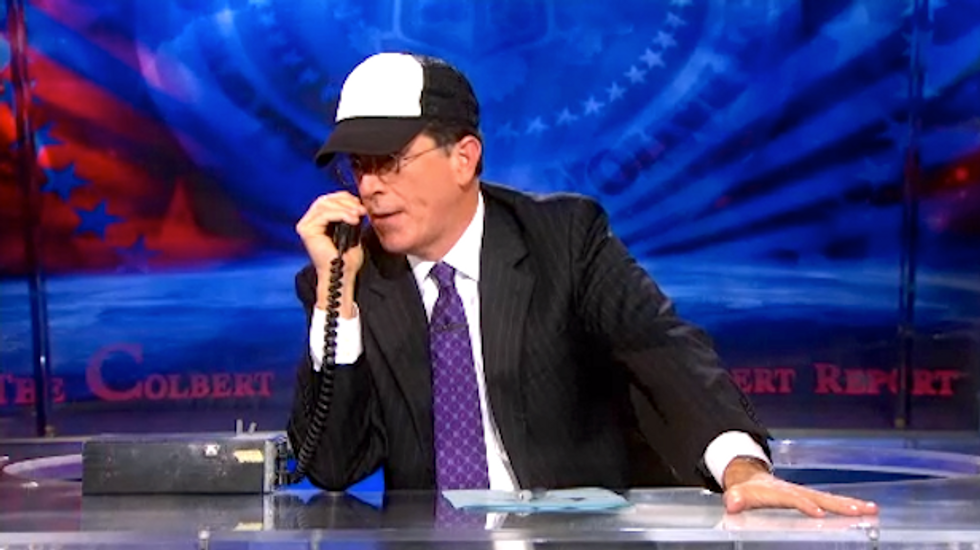 Wednesday night on “The Colbert Report,” host Stephen Colbert deployed a barrage of trucker slang as he discussed a planned protest intended to shut down the nation’s capital.

A group of truckers plans to drive the posted 55 mph speed limit Friday across three lanes of Interstate 495 to slow down traffic and, so they’ve claimed, to arrest President Barack Obama and his congressional supporters.

“What we want is, we want the president of the United States removed from office,” said Zeeda Andrews, a former country music performer who’s helping to promote the event, in a Fox News clip played by Colbert.

“President Obama will be so immobilized by the (Washington) D.C. traffic jam that he will have no choice but to resign. I mean, really, what option does he have, fly over it in some kind of gyroscopic sky car?” Colbert asked, showing an on-screen graphic of Marine One, the president’s official helicopter.

Colbert showed a clip of another protest organizer, who said they expect up to “100 million people” to join the protest by Friday afternoon, creating “literally the largest traffic jam in the history of mankind, as far as we’re concerned.”

Colbert donned a trucker cap and pulled out a CB radio to demonstrate what the truckers might say to one another.

“Breaker, breaker one-nine, this is Big Daddy Truck Nuts here, come on back,” Colbert said. “I want every freight-shaker, coal bucket and wiggle wagon out there to roll on Bull City Friday for a three-lane brake check until we deliver a truckload of Kenya back to his home 10-20. Also, ding-dang on the flippity-flop, drop two over easy on the wrap and put some seat covers on Toad the Wet Sprocket. This is Big Daddy Truck Nuts, over and out.”