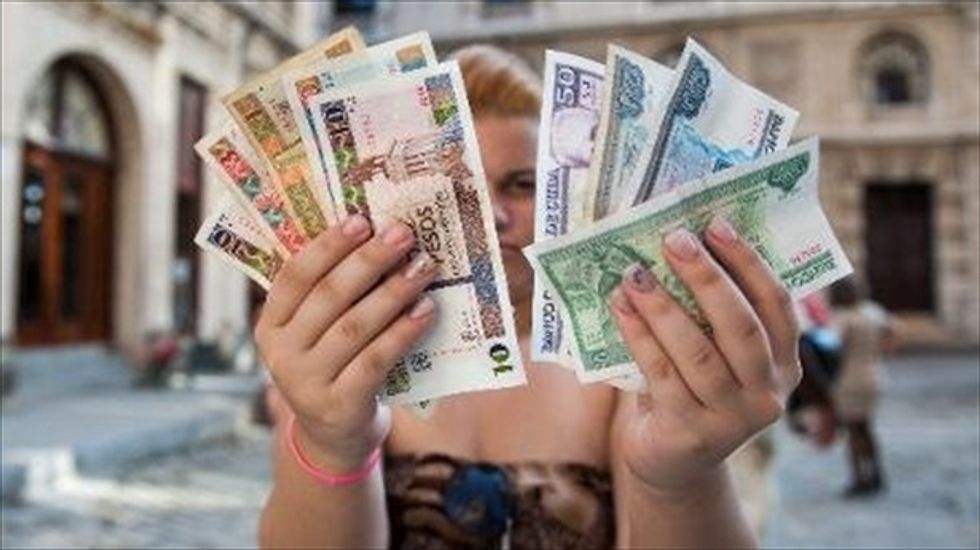 Cuba announced Tuesday it was ending an unpopular 19-year-old dual currency system that has contributed to a growing wealth gap between Cubans with access to dollars and those without.

Cubans who have access to convertible pesos are mainly those who work in the tourist industry or who receive money from family members living abroad, who send an estimated $2.5 billion a year.

The official Communist Party newspaper Granma said the new unified currency would be phased in over time.

Under the current system, Cuba exchanges dollars received through tourism, trade and overseas remittances into convertible Cuban pesos at a rate of one for one.

But the state pays workers' salaries and charges for services in ordinary pesos, which are worth far less, 24 to one convertible peso.

Many basic necessities here are available only in convertible pesos at special state-run stores, a source of tension between Cubans who have access to dollars and the majority who don't.

Ending the dual system, which has been in effect since 1994, was a key demand raised at the VI Communist Party Congress in April, 2011.

Under President Raul Castro, Cuba has been slowly overhauling its Soviet-style economy, allowing private enterprise on a small scale as it tries to slim down hulking state-run bureaucracies.

The gap between the haves and have nots, meanwhile, has become more noticeable as more Cubans turn to a nascent private sector to make a living.

Granma said Cuba's council of ministers approved a timetable for implementing "measures that will lead to monetary and exchange unification."

While it was not clear how long the changeover will take or exactly how it will function, Granma said it would begin with companies operating in Cuba and extend to individuals at a later date.

Granma said the change would contribute to efficiency, improve the way economic events are measured and serve as a stimulus to enterprises that export goods and services, as well as to those that produce for local consumption.

Besides the social inequalities it has bred, the double currency system also has made a mess of national accounting, "distorting all economic reality," said Pavel Vidal, a Cuban economist at Colombia's Universidad Javeriana.

"This distortion of economic measures falsifies all decisions taken by companies and all centralized planning," he said.

In 2004, then president Fidel Castro withdrew the dollar from circulation in Cuba in response to US tightening of a half-century-old embargo.

At the same time, he devalued the convertible peso, known as the CUC, by eight percent and increased the commission for changing money by 10 percent.

Raul Castro, who succeeded an ailing Fidel two years later, re-established the CUC's parity with the dollar in 2001.

In making the latest change, Granma assured that the government would not resort to "shock therapies."

Moreover, it said they would not affect legitimate earnings in either convertible or ordinary pesos, nor people with savings in Cuban banks.