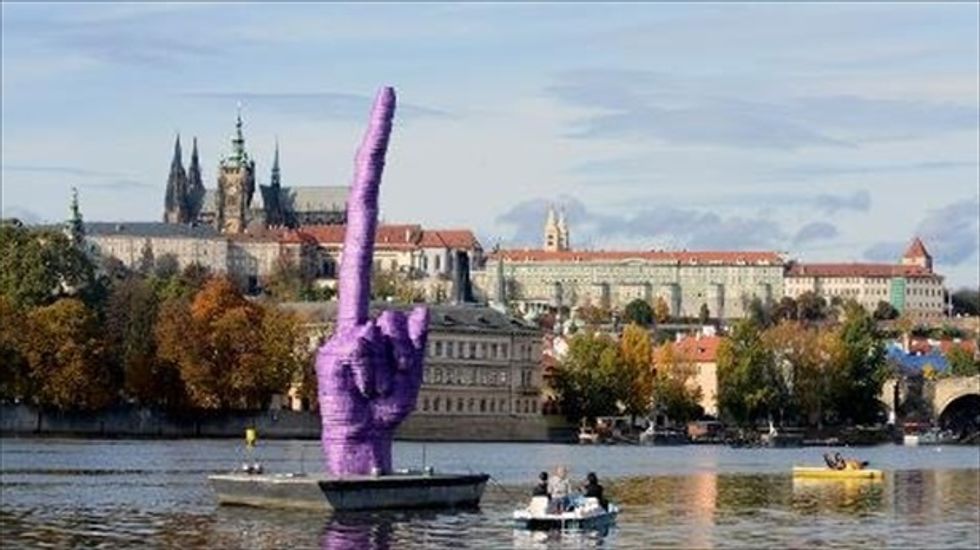 People sailing on the boats on Vltava River look at the giant purple middle finger sculpture by Czech artist David Cerny on Oct. 21, 2013 in Prague. [AFP]

A Prague artist has given Czech President Milos Zeman the finger -- a huge purple one floating on the river -- to protest against his soft spot for old-school Communists just days before a snap election.

Floating on a barge on the Vltava river in Prague's historic centre, the 10-metre-high (33-foot-high) purple sculpture of a fist with a long protruding middle finger is aimed right at Zeman's presidential headquarters in Prague Castle.

Cerny is known for his hatred of the Communists, who ruled the former Czechoslovakia in 1948-1989 and are poised to regain some of their power in the two-day election ending on Saturday.

While the Social Democrats (CSSD) are likely to win, they will almost certainly have to rely on Communists -- some with Stalinist sympathies -- to govern.

This would make the far-left a power broker for the first time since the Velvet Revolution brought down totalitarianism here over two decades ago.

Zeman, himself an ex-Communist, became the first directly-elected Czech president in January this year.

He accepts the prospect of Communists resurfacing in the political arena, but it has outraged Czechs who openly defied the former regime.

"It's a political protest against the president and against his party running in the elections," Prague pensioner Miloslav Heller told AFP, admiring the sculpture.

The centre-right government of Petr Necas came crashing down over a bribery and spy scandal in June, paving the way for the snap election.

No stranger to controversy, the artist Cerny gained notoriety in 2009 with his Entropa artwork mocking Europe at the European Commission headquarters in Brussels during the Czech EU presidency.