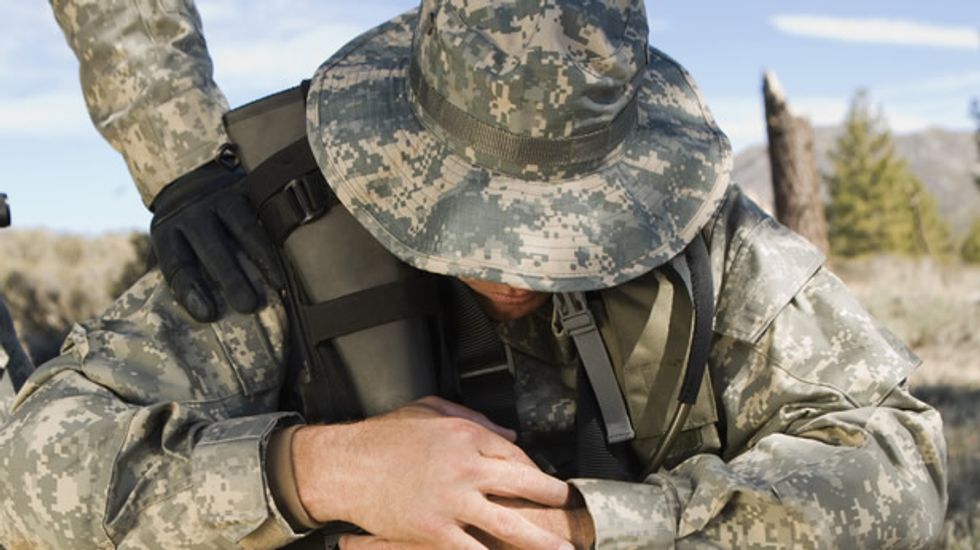 ["Sad Solider Sitting With A Gun" on Shutterstock]

The Pentagon's cutting-edge research agency hopes to use electrical brain implants to treat a variety of mental conditions.

The Defense Advanced Research Projects Agency (DARPA) announced its Systems-Based Neurotechnology for Emerging Therapies (SUBNETS) initiative this week. Its goal is to discover "the characteristics of distributed neural systems and attempt to develop and apply therapies that incorporate near real-time recording, analysis and stimulation in next-generation devices inspired by current Deep Brain Stimulation (DBS)."

"Deep Brain Stimulation" devices already exists as a therapeutic tool for certain patients who are unresponsive to other therapies. Approximately 100,000 people worldwide currently live with DBS implants, which at this moment are only devices that deliver "electrical stimulation to reduce motor impairment," but which DARPA believes can also be used to treat depression, obsessive compulsive disorder, Tourette's, epilepsy, general anxiety disorder and post-traumatic stress disorder.

"If SUBNETS is successful, it will advance neuropsychiatry beyond the realm of dialogue-driven observations and resultant trial and error and into the realm of therapy driven by quantifiable characteristics of neural state," according to Justin Sanchez, DARPA program manager.

"SUBNETS is a push toward innovative, informed and precise neurotechnological therapy to produce major improvements in quality of life for servicemembers and veterans who have very few options with existing therapies," he said. "These are patients for whom current medical understanding of diseases like chronic pain or fatigue, unmanageable depression or severe post-traumatic stress disorder can't provide meaningful relief."

As outlined in the agency's announcement, this will include devising a means of monitoring soldiers in combat conditions, and applying "deep brain stimulation" in real-time.

["Sad Solider Sitting With A Gun" on Shutterstock]