Experts called back from shutdown furlough to fight drug-resistant salmonella 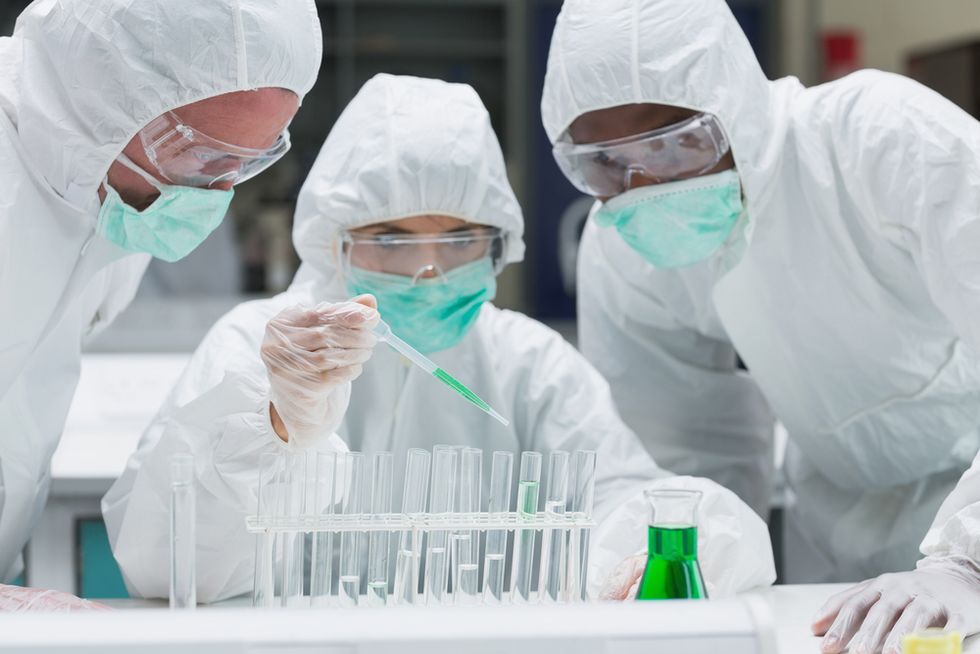 Scientists conduct research in a sterile environment via Shutterstock

The salmonella outbreak that now spans more than 18 states is landing its victims in the hospital at double the normal rate and includes multiple drug-resistant strains of the illness. According to ABC News, U.S. Centers for Disease Control and Prevention (CDC) experts have been called back from furlough to try and cope with the rapidly spreading epidemic.

"That's a high percentage," said CDC spokesperson Barbara Reynolds to USA Today. "You would expect about 20% hospitalizations with salmonella Heidelberg."

The CDC issued a public health warning about the outbreak on Tuesday, October 8. The CDC has called in 10 salmonella experts who were furloughed because of the Republican shutdown of the federal government, now in its eighth day. Since the shutdown began, only two of the organization's 80 specialists in food-borne pathogens have been on the job.

According to the CDC website, 77 percent of patients requiring hospitalization have been in California. No deaths have been associated with the outbreak so far.

Salmonella is a rod-shaped bacteria that attacks the digestive tract. It enters the body by way of raw or undercooked food. The current outbreak is believed to be connected to raw chicken. Thirteen percent of victims so far have developed salmonella septicemia, a life-threatening full-body inflammatory syndrome.

Caroline Smith DeWaal, food safety director of the Center for Science in the Public Interest in Washington told USA Today that the outbreak could hardly come at a worse time than during a shutdown of the federal government.

"This outbreak shows that it is a terrible time for government public health officials to be locked out of their offices and labs, and for government websites to go dark," she said.

As of Tuesday, the CDC reported 278 patients who were infected with seven strains of Salmonella Heidelberg after consuming Foster Farms brand chicken.

"The outbreak strains of Salmonella Heidelberg are resistant to several commonly prescribed antibiotics," said the CDC website. "This antibiotic resistance may be associated with an increased risk of hospitalization or possible treatment failure in infected individuals."

Symptoms of salmonella infection include stomach cramps, diarrhea, fever, nausea and vomiting within 8 to 24 hours of exposure. Other symptoms include chills, sweating, headaches, muscle pain and bloody stools. If left untreated, the disease can cause serious illness and death from dehydration, septicemia or other complications.

The disease is particularly dangerous to young children and the elderly or people who are immune-suppressed.

Consumers are urged to use normal food safety precautions while handling raw chicken, wash hands and surfaces after handling and be sure to cook all chicken to at least 165 degrees Fahrenheit before serving.

[image of scientists working in sterile environment via Shutterstock.com]