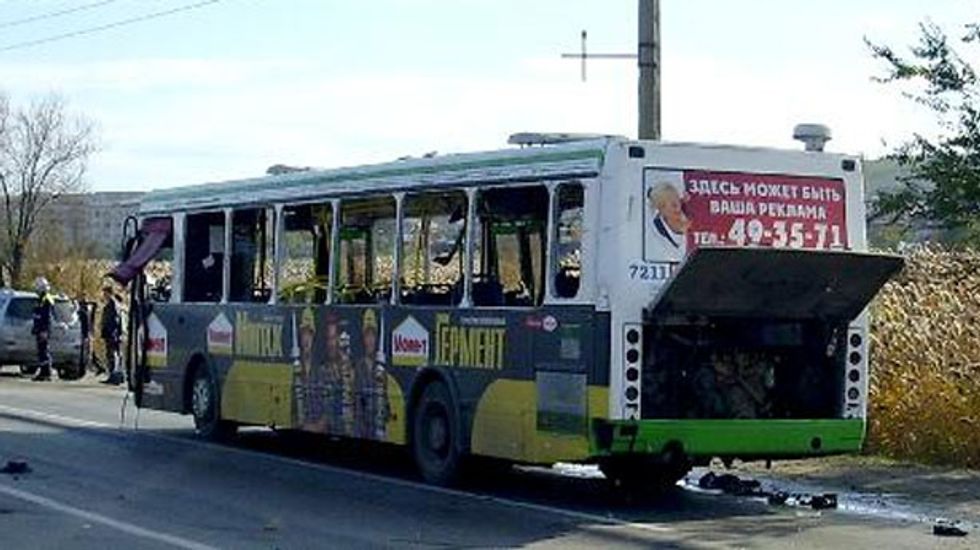 A suspected female suicide bomber blew herself up on a bus packed with students in southern Russia on Monday, killing six people and raising security fears less than four months before the Winter Olympics.

The attack in the Volga River city of Volgograd, which also injured more than 30 people, was the deadliest outside the volatile North Caucasus in the past three years.

An official at the Investigative Committee -- Russia's equivalent to the US Federal Bureau of Investigations -- said the suspected bomber was the wife of a North Caucasus rebel commander.

Footage broadcast on state television showed a green and white city bus standing mangled in the middle of the street, its windows blown out on the left side.

The Investigative Committee said officials had opened a formal probe into terrorism, murder and the illegal use of firearms.

"According to preliminary information, a native of Dagestan, 30-year-old Naida Asiyalova, blew herself up," investigators said in a statement, referring to one of the North Caucasus' most violent regions.

"She boarded the bus at one of the bus stops and an explosion took place almost immediately afterwards."

An official at the Investigative Committee said the suspected bomber was the wife of a rebel commander.

Investigators said 33 people, including a small child, had been injured. Twenty-eight victims were sent to hospital, eight of them in "extremely grave condition"

Officials said the packed bus was carrying about 40 passengers at the time of the explosion.

"There were lots of students on the bus," a man named Vladimir, whose daughter survived the explosion, told Moscow Echo radio from Volgograd.

"It was a powerful explosion -- a huge blast," he said.

"The bus was torn to pieces. When I came to pick up (my daughter), half the bus was simply not there."

Security remains a concern throughout southern Russia ahead of the February 7-23 Winter Games in the Black Sea resort of Sochi, which is located next to the North Caucasus.

'Terror is a real danger'

Russia fought two post-Soviet wars in the North Caucasus republic of Chechnya, and has since seen violence spill over to neighbouring Muslim regions such as Dagestan and Ingushetia.

Female suicide bombers are often referred to in Russia as "black widows" -- women who seek to avenge the deaths of their family members in North Caucasus fighting by targeting Russian civilians.

Militants are seeking to impose an Islamist state throughout Russia's Caucasus, and their leader Doku Umarov ordered his foot soldiers to target civilians outside the region and disrupt the Olympics.

"The leadership of the North Caucasus terrorist underground have repeatedly stated that they will bring terror deep into Russia," said Alexander Cherkasov of the Russian rights group Memorial.

So-called black widows were also responsible for taking down two passenger jets that took off from a Moscow airport within minutes of each other in 2004, killing about 90 people.

Several also participated in the September 2004 Beslan school hostage crisis that ended with the death of at least 335 people, about half of them children.