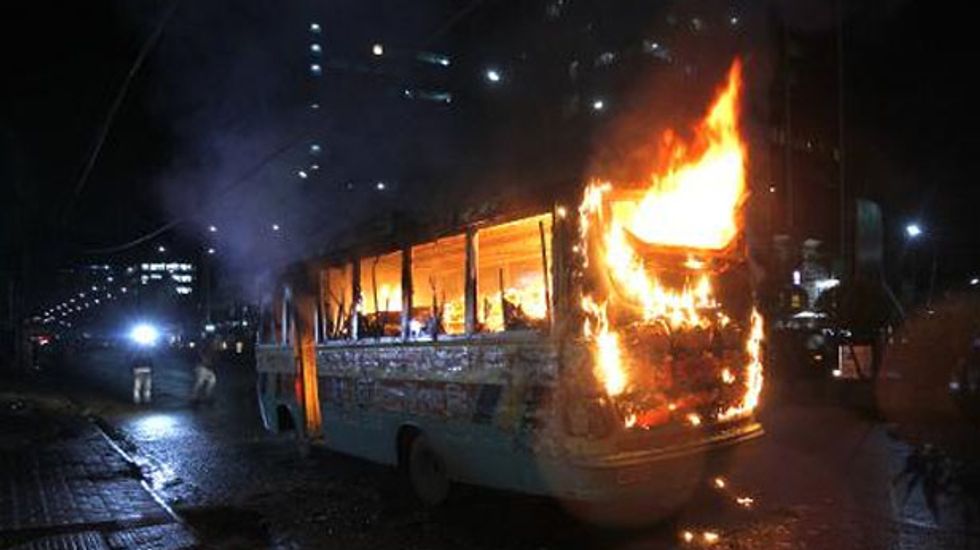 Five demonstrators were killed across Bangladesh and more than 100,000 opposition activists rallied in the capital Dhaka on Friday to demand that Prime Minister Sheikh Hasina quit and order polls under a caretaker government.

Police said the protesters died after officers and border guards opened fire in three towns as the supporters of the Bangladesh Nationalist Party (BNP) and its Islamist allies rioted across the country.

Two protesters were killed and several others were injured by bullets in the southern resort district of Cox's Bazaar when border guards opened fire at several thousand supporters of the Bangladesh Nationalist Party (BNP).

"The border guards opened fire after the BNP activists defied a ban on rallies and attacked the forces," Cox's Bazaar district deputy police chief Babul Akter told AFP. "Two persons were killed and a few more were hit by bullets."

Two more were killed by bullets in the central district of Chandpur after BNP activists clashed with police and ruling party supporters, local police chief Amir Jafar told AFP. "Police fired after the BNP supporters attacked them with arms and small bombs," he said.

A demonstrator died in the northern town of Jaldhaka after the elite Rapid Action Battalion opened fire at about 10,000 rampaging supporters of the Jamaat-e-Islami party, a key ally of the BNP, area police head Mohammad Moniruzzman told AFP.

The clashes occurred as the BNP and its Islamist allies called nationwide mass protests to force Hasina to resign ahead of the January 2014 elections and set up a technocrat-led caretaker government to oversee the polls.

BNP leader Khaleda Zia addressed a rally of over 100,000 supporters at a national memorial in central Dhaka, renewing her threat to boycott the polls and setting Hasina a new weekend deadline to hold a dialogue on her demand for a caretaker government.

"There will be no election under Hasina. We won't allow any one-party election. The election must include all parties and be conducted by a neutral caretaker government," Zia told the crowd, announcing a nationwide strike for Sunday to Tuesday to press her demands.

Local Dhaka police chief Sirajul Islam put the number of the crowd at the rally at "over 100,000". Witnesses and BNP officials said the figure was double.

Tensions have been rising in Bangladesh since Hasina's ruling Awami League (AL) party rejected an October 24 deadline set by the BNP for accepting its demands. The AL instead called on its activists to take to the streets to face down the opposition.

Zia, who has twice served as premier, branded the government "illegal" as of Friday, citing a legal provision that requires a neutral caretaker government to be set up three months before elections slated for January 2014.

But the ruling AL abolished the provision in 2011, handing the job of overseeing polls to a reformed Election Commission.

The government has deployed thousands of police and paramilitary border guards in Dhaka, in the port city of Chittagong where the ruling party called a rival rally that was peaceful, and other potential flashpoints.

Police said they fired rubber bullets in half a dozen other towns, leaving scores injured after the supporters of the AL party and the BNP clashed.

While the nation has a long history of political violence, this year has been the deadliest since Bangladesh gained independence in 1971.

At least 150 people have been killed since January after a controversial court began handing down death sentences to Islamist leaders allied to ex-premier Zia.

An ex-mayor of Dhaka fuelled tensions last week after he asked opposition supporters to join the protests armed with machetes and axes.

Fearing clashes, police banned all political rallies and street protests in major cities. But on Thursday night they decided to allow the BNP to hold the Friday rallies after the party vowed to defy the ban.

The last time the two main parties fought street battles was in late 2006, when dozens were killed, causing the country to shut down for weeks before the army stepped in to cancel elections and set up a military-backed caretaker government.

The seed for the latest crisis was sown in 2010 when the Hasina government announced there would be no caretaker administration at the next elections, arguing such a system enables the army to seize power in a country which has seen at least 19 coups since 1975.

The BNP has vowed to boycott polls without a caretaker government, arguing the system has delivered four successive free and fair polls since 1990 when democracy was restored after over a decade of military rule.