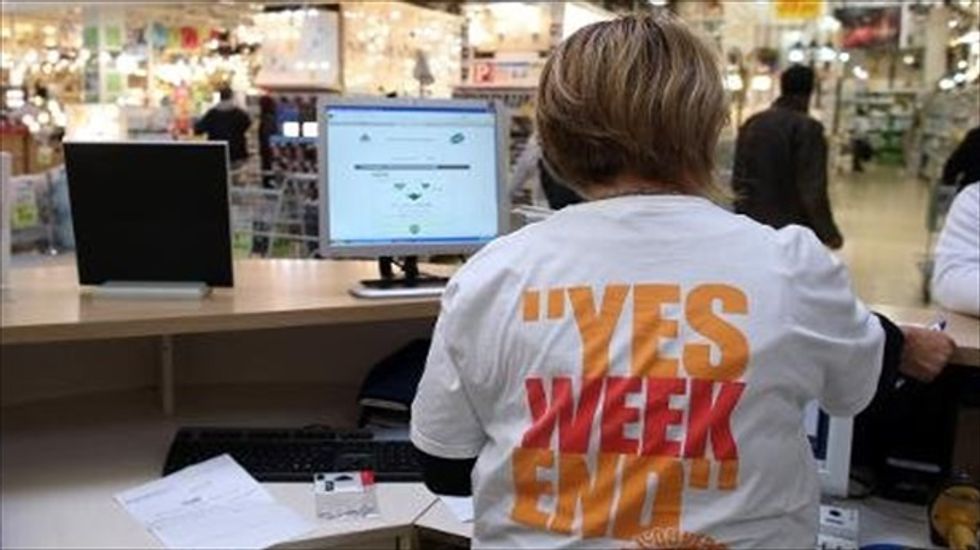 An employee works on October 6, 2013 in a French hardware store 'Leroy-Merlin' in Livry-Gargan. [AFP]

A French appeals court ruled on Tuesday that leading DIY chains Castorama and Leroy Merlin may keep their stores open on Sunday, in a possible landmark ruling against laws which critics say are archaic.

Under French law, retailers can open on a Sunday only under specific conditions: if they are located in a tourist or a high-density area. Any shop selling food, such as a butcher, can operate until 1:00 pm.

A trade tribunal in September ordered the two chains to close 15 outlets in the Paris region after a complaint filed by rival Bricorama. It ruled that any defiance would incur a fine of 120,000 euros ($162,000) per day per shop.

Some shops have received special permission from sympathetic local authorities to open on Sunday, but several home improvement stores just went ahead and opened anyway.

Bricorama had been forced to close on Sundays at the start of 2012 after being sued by a labour union.

It argued that if it was forced to shut on Sunday, so should its rivals ? a decision that was confirmed by the trade tribunal in the eastern Paris suburb of Bobigny.

But Castorama and Leroy Merlin had appealed against the judgement, describing a slew of different laws, authorisations and exceptions on the issue as a mess.

Castorama's lawyer Richard Renaudier said the two chains would open their stores from this Sunday following the ruling.

"This is only a first step," he said, underscoring that a more definitive ruling was due on November 22 following another suit launched by Bricorama in July.

Tuesday's ruling could see a relaxation of the strict laws on shopping hours.

Bricorama was also ordered by the appeals court to pay Leroy Merlin and Castorama 12,000 euros each in damages and interest.

The group's head Jean-Claude Bourrelier said the ruling was "totally incomprehensible" and "unjust".

Bricorama and Castorama have both also argued that the only way to settle the thorny issue of Sunday trading is for the government to streamline laws on the issue.

The woolly legislation has infuriated those who want to work on Sundays and drawn criticism that the laws are ill-suited to a time of economic hardship.

The controversy comes at a time when France, with the second-biggest economy in the eurozone after Germany, is grappling with record unemployment of more than three million and growth has stagnated.

About 30 percent of French workers work occasionally or regularly on Sundays. The law stipulates that this has to be on a voluntary basis and they earn 50 percent more for Sunday work.