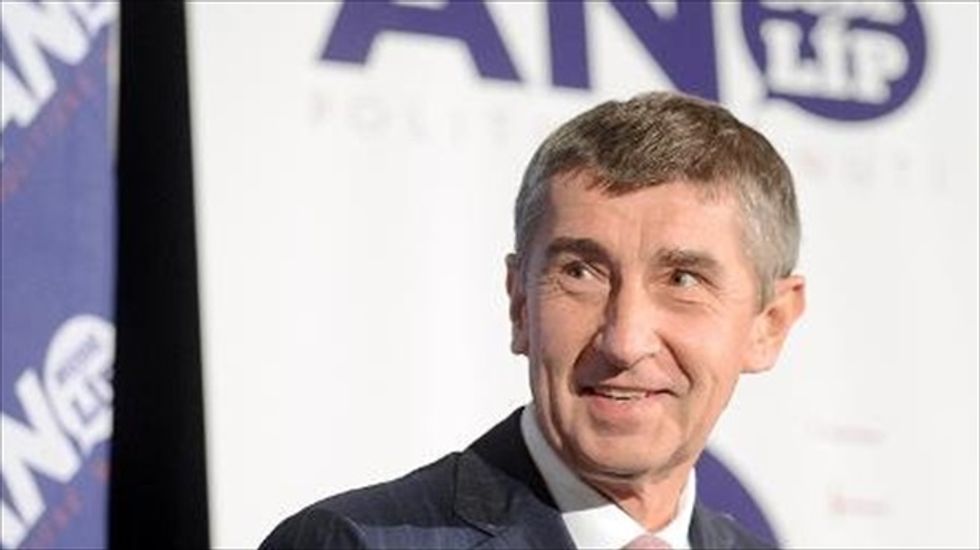 Czech billionaire, Andrej Babis, seen during an election campaign of his party 'ANO' ('YES', in Czech), in Prague. [AFP]

Irked by the never-ending litany of graft scandals plaguing Czech politics, voters are rallying behind a self-professed "incorruptible" tycoon set to enter parliament for the first time in elections this week.

The meteoric rise of Slovak-born billionaire Andrej Babis comes in the wake of a nosedive by centre-right parties, which were hit hard in the June collapse of Petr Necas's rightwing government over a high-profile bribery and spying scandal.

After launching the Czech Republic's largest trading conglomerate -- ranging from food to fertilisers and chemicals -- the 59-year-old Babis is now set to catapult his centrist ANO (YES) party into parliament in the two-day ballot ending Saturday.

Pre-election opinion polls show the ANO enjoying over 10-percent support, ranking the party established in 2011 in third place. The leftwing Social Democrats are poised to win ahead of the Communists.

"It's an anti-political movement betting on slogans like 'we aren't like politicians -- we work hard'," independent Prague-based political analyst Jiri Pehe told AFP.

With a net worth of two billion dollars (1.5 billion euros), Babis ranks 736th on this year's Forbes list of world billionaires.

Re-inventing US President Barack Obama's "Yes we can" campaign slogan, Babis is promising austerity-weary Czechs, "Yes, we'll be better-off" with a politician who knows how to make money.

He is also wooing voters with promises of squeaky clean politics.

A poll released by the Gallup Institute last week shows an overwhelming 94 percent of Czechs believe that "corruption is widespread in government."

"I'm terribly ashamed now since Czechs value doctors the most and politicians the least," Babis told voters at a recent campaign rally in the capital Prague, speaking in his strong Slovak accent.

Pundits have called him the country's Silvio Berlusconi, but Babis shuns any comparison to Italy's disgraced media tycoon turned politician.

But there is no doubt his cash is helping his political ambitions.

Earlier this year, Babis bought the Mafra publishing house which owns the top-selling DNES broadsheet, among others.

A few days later, Babis made an angry phone call to a reporter who failed to write a story about his press conference, sparking an uproar in Czech media and on social networks.

"When someone has money and good marketing, he will gain support," said Josef Mlejnek, a political analyst at Charles University in Prague.

"If people were not so upset with (traditional) parties and with the current situation, mere marketing might not be enough, but the conditions are favourable," he told AFP.

Some voters see Babis's big bucks as a big plus.

Prague university student Klara Vitova told AFP she thought Babis was immune to corruption as "he's got money and doesn't need to get more from others."

But his membership of the Communist Party prior to 1989 is a sticking point for come centrist and rightwing voters who had opposed the totalitarian regime which crushed opposition over its four decades in power in then Czechoslovakia.

"True, I don't have the best profile," Babis admits matter-of-factly.

Allegations that he was also a communist secret police agent have also surfaced, something the born-again capitalist has staunchly denied.

But his supporters turn a blind eye.

"I would mind to a certain extent, but the question is whether he can offer a realistic programme," 18-year-old student Stepan Denk told AFP at a recent ANO campaign rally.

An ex-communist EU member of 10.5 million, the Czech Republic was hit with a record 18-month recession which ended in the second quarter.

Heavily dependent on car production and exports to western Europe, the Czech economy contracted by 0.9 percent in 2012 and the central bank predicts a 1.5-percent slump this year before a pick-up in 2014.