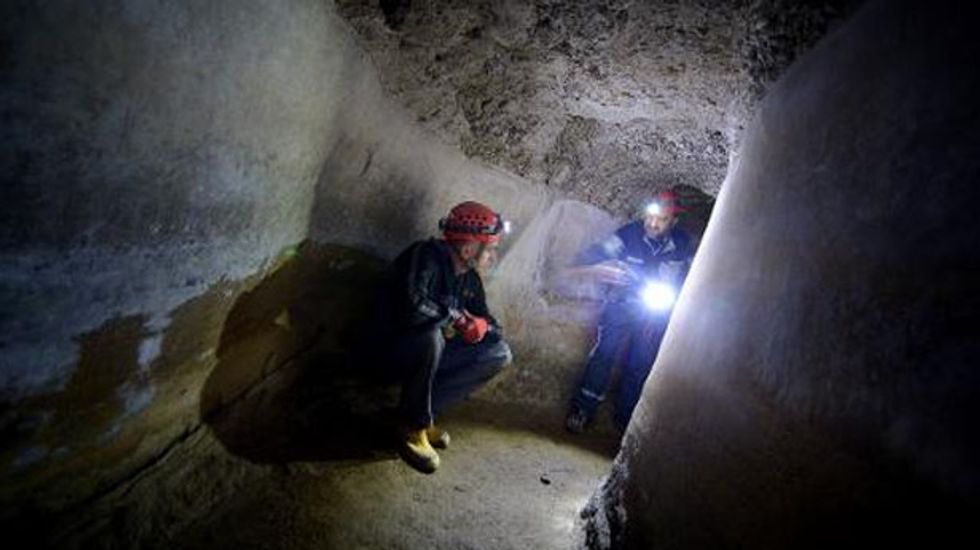 Armed with laser rangefinders, GPS technology and remote control robots, a group of speleologists is completing the first ever mapping of the aqueducts of ancient Rome on archaeology's "final frontier".

They abseil down access wells and clamber through crevices to access the 11 aqueducts that supplied Rome, which still run for hundreds of kilometres (miles) underground and along stunning viaducts.

The mission of these "speleo-archaeologists" is to update the last above-ground map of the network compiled at the beginning of the 20th century by British Roman archaeologist Thomas Ashby.

As he made his way through a perfectly preserved tunnel section of the Acqua Claudia on the grounds of a Franciscan convent in Vicovaro near Rome, Alfonso Diaz Boj said he was "proud" of the study.

"It combines what was the birth of archaeology as a science with the latest instruments available," said Diaz Boj, a member of Sotterranei di Roma (Underground Rome), in a hard hat and torch.

The pick marks of the Roman diggers can still be seen in the limestone of the tunnel completed in 38 AD under the Emperor Claudius and a lawyer of calcification about half a metre off the ground shows where the water level would have been.

"These aqueducts may not be as beautiful as a statue or like some architecture but I think they are important, they are very beautiful," he said.

The ancient waterways were true feats of engineering, which relied solely on gravity to ensure a flow of water can be seen across what was once the Roman Empire from Germany to North Africa.

Their strategic significance is underlined by the fact that Rome had a special magistrate to oversee their maintenance and that the Visigoths cut them off when they were laying siege to the city.

The Acqua Claudia runs 87 kilometres (54 miles) from the Simbruini Mountains to the heart of Rome and supplied 2,200 litres of water a second.

Only one of the aqueducts is still operational today -- the Acqua Vergine -- which can be accessed in various hidden locations near Rome including a doorway near the Villa Medici that leads down a spiral staircase to the water.

The Acqua Vergine runs for a total of 20 kilometres and ends up in the Trevi Fountain, photographed every day by crowds of tourists.

"Underground Rome is a final frontier," said Riccardo Paolucci, another explorer, as he examined a viaduct in a valley near Vicovaro that carried the water further towards the city.

"Water was a fundamental service for hygiene. In a city like Rome, which had a million inhabitants, there were very few epidemics," he said.

"There was a concept of service for the people, for the city. It is a key concept that is maybe lacking not just in modern Rome but globally."

Diaz, Paolucci and the others from Sotterranei di Roma work together with Rome's archaeological authority, helping them understand what can be seen above the ground from what is underneath and inaccessible without specialist equipment.

"We are who we are because of what we have inside and Rome is what it is because of what is underneath it," said Paolucci, a specialist potholer who is also called to emergency incidents or whenever a sinkhole opens up in the city.

The group also organises guided tours and courses, including one on the aqueducts starting next month, and are earning an international reputation. They were commissioned to map the underground remains of ancient Ephesus in Turkey.

Their study of the aqueducts is based on the map made by Ashby, director of the archaeological British School at Rome between 1906 and 1925.

Ashby's signature can be seen scrawled on the wall of a section of the Acqua Marcia aqueduct, which also transits through Vicovaro, alongside graffiti and poems dating back to the 17th century from visitors who stumbled on the ancient waterway.

"Ashby's maps were ahead of their time," Diaz said.

"He want to the villages, to the local trattorias, he spoke to farmers, to hunters. He found what he found thanks to local knowledge," he said.

"It is a technique that we still use today."