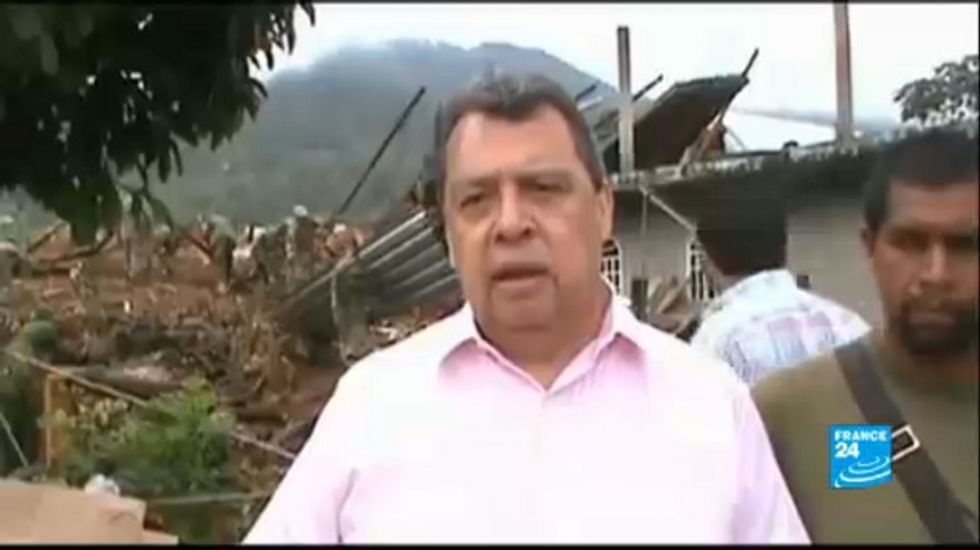 Hurricane Raymond picked up strength Monday as it churned off a region of Mexico's Pacific coast still recovering from a devastating storm last month.

In just a few hours, Raymond went from a tropical storm to a Category Three hurricane on the five-point Saffir-Simpson scale, the Miami-based National Hurricane Center (NHC), which tracks hurricanes in the hemisphere, reported at 0900 GMT.

"Some additional strengthening is possible during the next day or so," the NHC warned.

Raymond however stalled some 265 kilometers west-southwest of the resort town of Acapulco after steadily moving for hours towards the mainland, the NHC said.

Raymond's storm surge along Mexico's south-central Pacific coast is nevertheless expected to produce "significant coastal flooding" within the warning ares, and the surge "will be accompanied by large and destructive waves."

Swells generated by Raymond "are likely to cause life-threatening surf and rip current conditions."

The NHC predicted that Raymond would drop between five and 10 centimeters of rain "with isolated amounts up to eight inches [20 centimeters]" over the Mexican states of Guerrero and Michoacan.

Authorities in both states issued alerts that included closing ports, evacuating people from flood prone areas, monitoring dams and rivers, and closing schools in some communities.

The head of Mexico's National Commission on Water, David Korenfeld, predicted "torrential rain" over the next 72 hours, and warned that soil across the region was already saturated with water, increasing the chances of flooding and landslides.

In mid-September, Hurricane Manuel struck Guerrero, while another weather system, Ingrid, slammed almost simultaneously into the opposite coast.

Hardest hit was Guerrero, where landslides triggered by Manuel partially buried a mountain community and 101 of the deaths were recorded.

The unusual double storm blast occurred during a holiday weekend, leaving thousands of tourists stranded in Acapulco when airports and highways were closed.

In Guerrero state alone, 5,000 people are still living in shelters due to the storm.

Rain from Raymond is expected to reach Mexico City.

Korenfeld said Mexico was on its way this year to breaking a record by being hit by eight named tropical storms or hurricanes -- four on each coast.

"And we are close to breaking the all-time record of nine named storm strikes in one year," which was in 2010, he added.

There was however a chance that a cold front coming down from the north could hit Raymond and push it back out to the ocean, Korenfeld said.

Local officials however are taking no chances: in Michoacan 34 shelters were prepared and school classes were canceled in four municipalities, the secretary of the state government, Jaime Mares Camarena told AFP.

In Guerrero, officials kept a close eye on area dams, already bursting at full capacity, and closed area ports to small vessels, since the storm is expected to churn up waves of up to four meters high.

In Acapulco, already enduring heavy rain from the outer bands of the storm, locals were boarding up their windows, while classes were suspended for 35,000 students, local Civil Protection officials said.