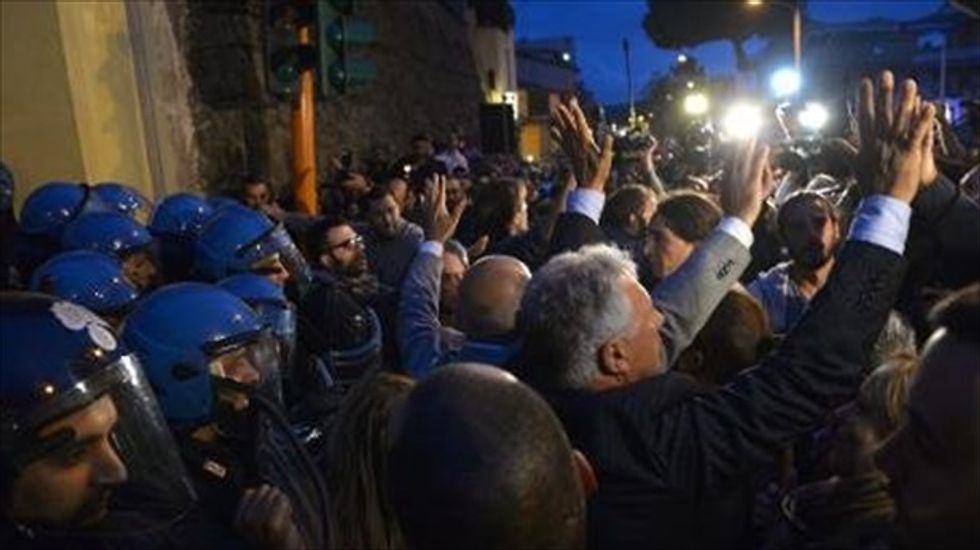 Anti-fascist protestors demonstrate during for the funeral of Nazi war criminal Erich Priebke in Albano Laziale near Rome on Oct. 15, 2013. [AFP]

Catholic breakaway traditionalists held a funeral for Nazi war criminal Erich Priebke in a town near Rome on Tuesday as hundreds of angry protesters outside shouted "Assassin!" and "Hangman!"

The ultra-conservative Society of St Pius X in Albano celebrated a private ceremony in Latin with family and far-right extremist sympathisers present for the unrepentant former SS officer.

The protesters banged on the hearse carrying Priebke's coffin as it was driven through gates into the seminary from a hospital morgue in Rome as dozens of police in riot gear pushed them back.

Priebke died last week aged 100 while living under house arrest in Rome for a 1944 massacre of 335 people, including 75 Jews, at the Ardeatine caves near the city in retaliation for a partisan attack.

The death of the Holocaust denier, who said he was only following Gestapo orders, has triggered controversy over his funeral and burial.

There were tensions between protesters and far-right activists in Albano, who performed Nazi salutes and shouted fascist slogans.

"We are here to remember him because he was part of our world. This is just like any other funeral," said one far-right activist, Maurizio Boccacci, from a group called Militia.

Local mayor Nicola Marini issued a last-minute decree to prevent the hearse from crossing his town's territory but the ruling was struck down by the Rome prefecture responsible for public order.

"Take him to the landfill!" one man shouted as the black hearse passed through the crowd, while others sang the Italian partisan song "Bella Ciao" and held up a banner reading "Priebke Hangman".

A priest from the Society of St Pius X had to be protected by police as he tried to enter the seminary after being shoved by the protesters.

"This is a moment of mourning and has nothing to do with politics. We have done our best to respect the feelings of his critics," Priebke's lawyer Paolo Giachini told reporters before the funeral.

But mayor Marini, from the leftist Democratic Party, said he was "shocked", adding: "We are absolutely against this event. We have a tradition of resistance here. This really hurts us."

Tensions are running particularly high in the Italian capital as Wednesday marks the 70th anniversary of a raid by Nazi troops that cleared out the city's historic Jewish quarter.

The funeral coincided with a silent procession through the Rome Ghetto in honour of the more than 1,000 Jews who were taken away to concentration camps -- of whom only 16 came back alive.

There are unconfirmed reports that Priebke could now be cremated, amid fears that a burial could become a rallying point for far-right groups.

Argentina, where Priebke lived for nearly 50 years before being extradited to Italy and where he wanted to be buried, has refused to take the body.

The Vatican also issued an unprecedented ban on celebrating the funeral in any Catholic church in Rome, although it said that a priest could officiate a private ceremony at home.

Jewish groups and relatives of the massacre victims have said the body should be cremated and the ashes scattered to erase his memory forever.

The Society of St Pius X is a Catholic conservative group that broke off from the Vatican in 1970 over opposition to reforms and is often accused of far-right and anti-Semitic leanings.

A British bishop who used to belong to the Society, Richard Williamson, has been convicted in Germany in absentia for being a Holocaust denier.

Priebke escaped from a British POW camp in Italy immediately after World War II and was supplied with Vatican travel documents by a Nazi-sympathising Catholic bishop.

He lived in Argentina, before being placed under house arrest in 1994 following a news report on him. Priebke was extradited to Italy in 1996.

He was sentenced to life in prison in 1998 for his role in the bloodbath at the Ardeatine caves.

Because of his age and ill-health he was allowed to serve out his life sentence at home.

Far-right sympathisers earlier this week were prevented by police from laying flowers outside the house where he died. But a scrawl reading "Honour to Priebke" next to a black swastika symbol appeared on a wall nearby.