John Kerry: Israeli and Palestinian negotiators putting 'all the core issues are on the table' 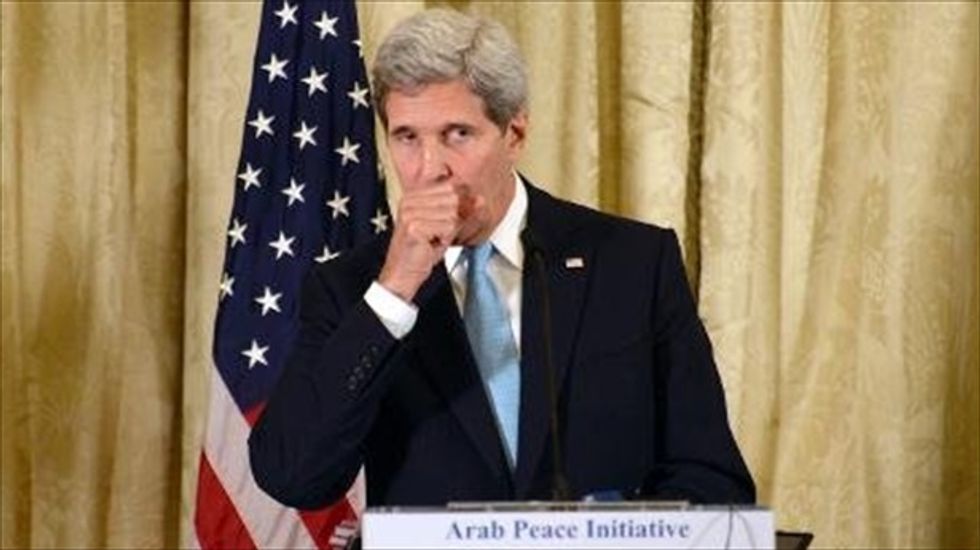 Secretary of State John Kerry gives a press conference after a meeting with the Qatari Foreign minister on Oct. 21, 2013 in Paris. [AFP]

U.S. Secretary of State John Kerry said on Monday that talks between Israel and the Palestinians were intensifying and that all issues were on the table.

He also announced that Qatar had agreed to provide $150 million (110 million euros) in debt relief to the Palestinian Authority.

Speaking after talks with Arab League officials in Paris, Kerry said Israeli and Palestinian negotiators had so far held 13 meetings, including three meetings in the last four days alone.

"The pace has intensified, all the core issues are on the table and they have been meeting with increased intensity," Kerry told journalists at a joint press conference with Qatari Foreign Minister Khaled al-Attiyah.

Since becoming secretary of state in February, Kerry has dedicated much of his energy to restarting peace talks between Israelis and Palestinians, which were frozen in September 2010.

Under intense U.S. pressure, the two sides resumed direct talks for the first time in nearly three years in Washington at the end of July.

"It is no secret to anybody that this is and remains a difficult process, there is no shortage of passionate sceptics," Kerry said.

"The Israeli and Palestinian people both have leaders who absolutely understand what is at stake and they have taken risks to bring both parties to the table."

Kerry praised the Arab League's "remarkable commitment" to pushing the peace process, saying it is "critical to creating the momentum and the seriousness of purpose that is essential in order to be successful in these talks."

He praised the Qatari move to provide "urgently needed" debt relief to the Palestinians and said he was "confident" that other Arab countries would follow suit.

Attiyah meanwhile said the Arab League was "concerned about the environment" surrounding the peace talks, singling out the expansion of Israeli settlements and the continued isolation of the Gaza strip.

"We talked about the issue of Gaza and the futility of isolating Gaza," he said, in comments translated into English.

"There are millions of people living in Gaza and they are in need of food supplies and medicine," Attiyah said.

"There must be a way to open the crossing points to all parties to enable the people in Gaza to live."

Kerry is to meet later this week with Israeli Prime Minister Benjamin Netanyahu in Rome to discuss the peace talks.