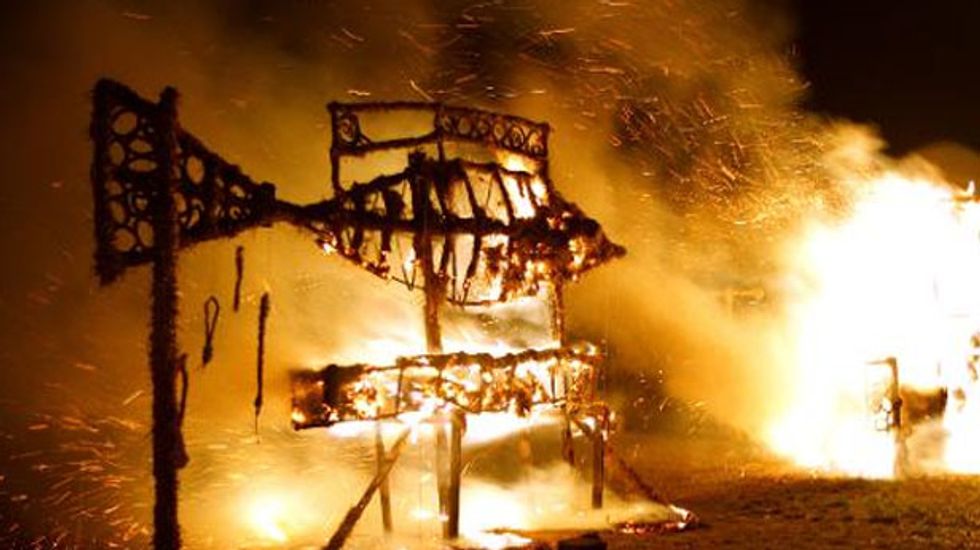 Winter is around the corner and for one Lithuanian town that means building a village of straw only to burn it down in a ritual that draws thousands to the tiny locality, nostalgic for old traditions.

"It's a form of renewal for us," said Vigita Dumbriene, the main organiser of the event in Naujamiestis, a locality of 800 residents in the northeast of this Baltic state.

"There's immense interest," she said, in an area where both straw and fire hold their place in age-old customs -- and where straw is abundantly available after the autumn harvest.

This year's theme was a farmer's market with 40 huge straw sculptures of chickens, a goose, a carp, a large pig big enough for children to straddle, a baker's oven, even a tavern where visitors could buy food on the opening day.

For 12-year-old Matas, the best of this year's sculptures -- some several metres (feet) high -- was the car, since he could pile in with his cousins.

The village opened on October 6, drawing several hundred visitors in the month leading up to the grand finale when it went up in flames -- with fireworks and traditional dance -- before a crowd of 2,000.

The now-annual ritual was the brainchild of Dumbriene and her colleagues at the local cultural centre who thought why not have a little fun with the plentiful post-harvest haystacks.

"We thought it would be a nice idea that would draw people," she said.

The first theme, in 2006, was Count Cicinskas, a character from local folklore known for his depravity, while last year the sculptures were all musical instruments.

The cultural centre's employees spent the month of September creating the sculptures, with some eight tonnes of straw and 10 kilometres (six miles) of rope donated by a local farmer.

Village residents -- and some from farther afield -- lend a hand or drop off food for those toiling away, recalling the solidarity of the "old days" .

"I really like that people spare some of their free time to make these sculptures," said Erika, a 40-something piano teacher from the nearby city of Panevezys who comes each year.

Straw is an age-old fixture here. Lithuanians use it to weave fruit baskets and other items for the home, while children make straw angels for the Christmas tree.

Fire, too, is a tradition.

Lithuanians organise a large Midsummer's Day bonfire every June to mark the summer solstice, and in winter they burn large witch dolls for Mardi Gras to mark spring's arrival.

Vytautas, a civil servant in his fifties who gave only his first name, likened the annual rite in Naujamiestis to a meditation exercise: the townspeople patiently build up the village then undo it three weeks later.

"It's like a mandala," he said, referring to the spiritual symbol representing the cosmos and unity.

For the first time this year, the cultural centre was granted nearly 15,000 euros ($21,000) for the project from the European Union's Leader initiative for rural development.

The straw village has even spawned copycats.

"We also wanted to create one, but our sculptures kept falling apart," said Antanas Bajerunas, an employee of a neighbouring community's cultural centre.

"I came here to learn their secret," he said, camera in hand.