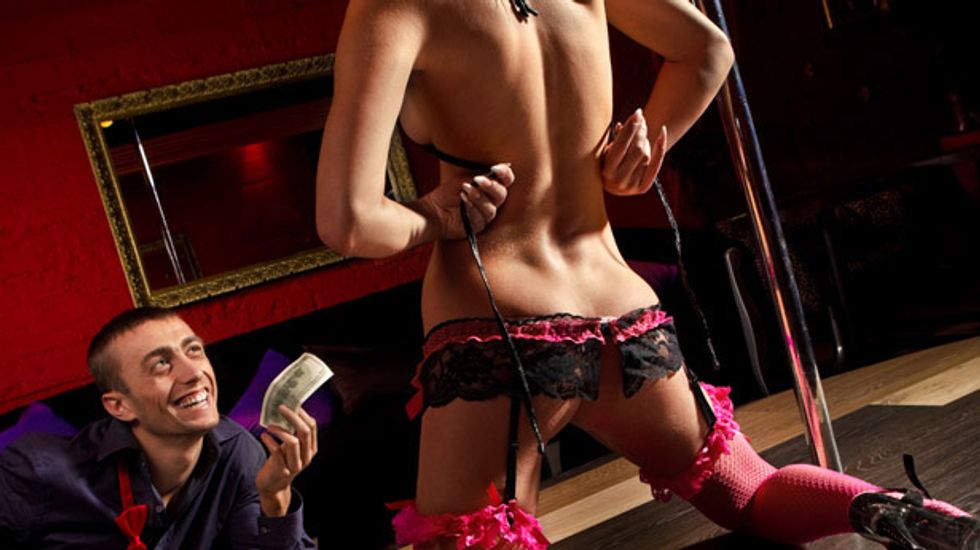 Rick Shaftan (Shut your mouth. But I'm talkin' about Shaftan! Then we can dig it) is a key strategist in Steve Lonegan's already smouldering wreckage of a campaign in New Jersey against Barack Obama v2.0, whom you may also know as Cory Booker, Saver Of Cold Dogs and Hot People. In this role, Shaftan advises Lonegan to do things like not use the N-word out loud, not grab his crotch for emphasis (also known as "Jersey punctuation'), and to stall off Sarah Palin's appearance until this weekend because Jersey is already up to their freakin' ears in Snookis. But when Shaftan isn't collecting a check from Lonegan, he is Quite. The. Ladies. Man. with advice on how to take advantage of Twitterstrippers and also how to not sound totally gay gay gay when hitting on the babes.

In a profanity-filled assessment of the race delivered via phone Thursday, Rick Shaftan, a senior staffer and key strategist on Lonegan's campaign, suggested voters would be turned off by Booker's "odd" behavior including Twitter messages the Democrat sent to a stripper, that Shaftan described as "strange" and "like what a gay guy would say."

"It was just weird. I mean, to me, you know, hey, if he said, 'Hey, you got really hot breasts man, I'd love to suck on them.' Then like, yeah, cool. But like, he didn't say that," Shaftan explained. "It was like kind of like, I don't know, it was like what a gay guy would say to a stripper. It's the way he was talking to her. It's just like like there was no sexual interest at all. I don't know. To me, if I was single and you know like some stripper was tweeting me, I might take advantage of the perks of the office, you know?"

"This is strange. It's just weird. ... It's like, 'I don't know who she is. I don't know anything about her.' Get the fuck out of here dude. You can't follow her Twitter page and not know she's got those great breasts. How do you fucking not know?" Shaftan said. "It's just too odd and people they just wonder, like, who does this guy really want to work for? Who's he representing?"

The Gays. Definitely The Gays. Because breasts (particularly "great ones") are like kryptonite to The Gays. Therefore, in light his inability to comment on said breasts, Cory Booker must be gayer than a Disney elephant*. I mean. c'mon. Boobs.

But, boobs aside, how's that Lonegan campaign going?

After his extensive, X-rated breakdown of the Booker campaign, Shaftan had a more prosaic take on Lonegan's position heading into the final days of the race.

"Where are we in the home stretch?" Shaftan asked. "Surging."

To be followed by cuddling and maybe a post-electoral cigarette. And then guilt, disgust, and sadness...

UPDATE: Lonegan to fire Shaftan so he'll have more time to spend with his stripper family.