Los Angeles restaurant tries to combine cuisine with the commode 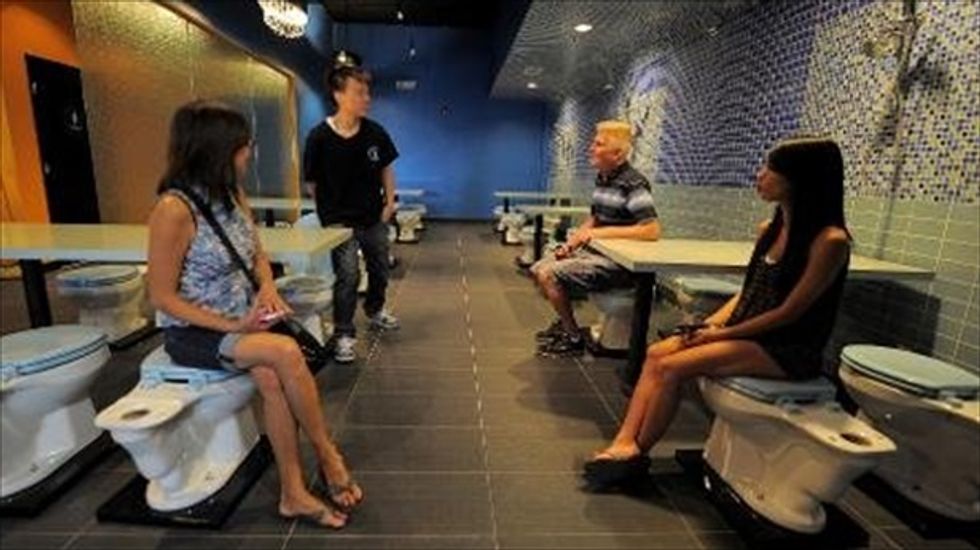 Customers take a seat at the Magic Restroom restaurant in California, on Oct. 19, 2013. [AFP]

A restaurant billed as America's first toilet-themed eatery has just opened in Los Angeles -- and is packing in diners after a wave of free publicity for the concept, said to be imported from Asia.

The Magic Restroom restaurant, where customers sit on ceramic bathroom bowls and eat from toilet-shaped tableware, did brisk business on its first fully open weekend.

Some might wonder who would want to eat surrounded by reminders of where the food ends up. But Friday's grand opening was by all accounts a huge success, fueled by media interest from around the world.

"Business for the past couple of days has been very good. It's always a full house with customers waiting in the lobby," said waiter Daniel Chyan as diners bustled around him on Sunday.

The idea comes from Taiwan, he said.

"The food we serve here its actually normal, it's typical Taiwanese food, like for example beef stew noodle," he added.

A random poll of customers Sunday suggested the eatery has the right ingredients for success.

Denesse Elias said her chicken was served in a urinal while a shrimp rice order came in a small toilet.

"It was kind of weird at first eating from them," she said. "But the food was really good so it didn't make a difference."

Tania Moore added: "I was like, Magic Restroom Cafe? What is that? And we walked in and there just were toilets everywhere. It was really interesting. It was cool."

Even a Frenchwoman, whose country is known for its demanding gastronomic standards, was impressed.

"The food is very well presented. It's in little toilets so it's quite funny," said Marjorie Decriem, who lives in Los Angeles.

"You have to choose your dishes carefully because some are more appetizing than others. But the food is very good. I think we will return with friends because it's really a place to discover."

The launch has made toilet humor headlines around the world, including "Owners of 'Restroom Cafe' flush with success" (The Washington Post) and "Poop for dinner? Restroom-themed eatery serves up unsavory-named dishes" (Daily Mail).

"Toilet restaurant: would loo believe it?" read another.

On its Facebook page, the Magic Restroom had nearly 1,100 "likes" by Monday, while some 700 people were talking about the restaurant.

But not everyone is convinced.

"What a disgusting theme for a restaurant," wrote Celia Yatawara. Bet you couldn't think of anything more adequate for meal time."