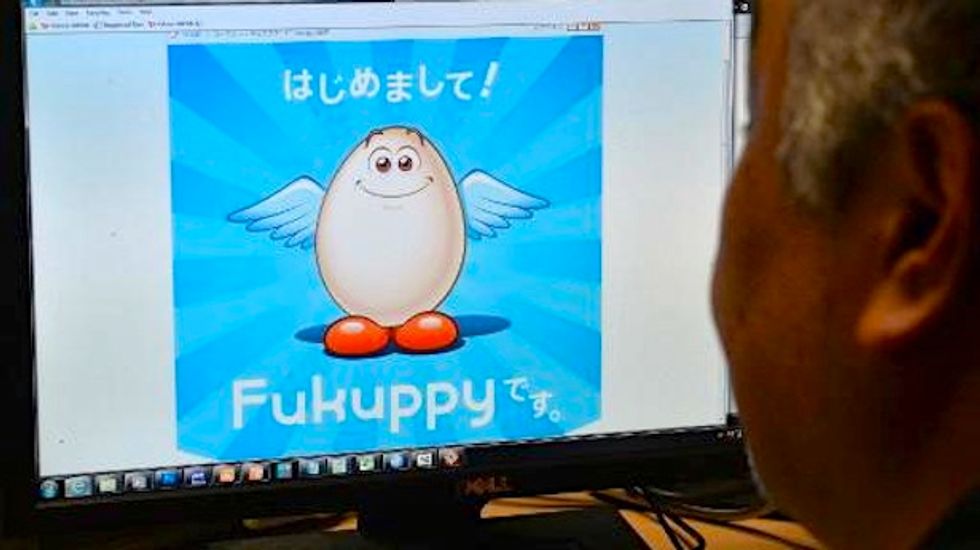 Japan's Fukushima Industries said Tuesday it was rethinking its "Fukuppy" mascot, after the Internet erupted in sniggers over a name that recalls the catalogue of mishandling at the Fukushima nuclear plant.

The Osaka-based refrigerator maker, whose name derives from its founder and has nothing to do with the area hit by an atomic catastrophe, has been ridiculed on social networking sites for the name it gave its egg-like mascot, which has blue wings and red feet.

"I'm Fukuppy. Nice to meet you," the smiling character with a human face tells visitors to the company's website. "I think I'm kind with a strong sense of justice but people say I'm a little bit scatterbrained."

Fukushima Industries unveiled "Fukuppy" in April, blending the first part of the company name -- Fuku -- and the end of the English word "happy," saying it represented the corporate philosophy of being a happiness-creating company.

But the striking moniker was mistaken for "an inappropriate word among people in English-speaking places or its meaning was misunderstood on the Internet," the company said in a statement.

"We sincerely apologize for worrying many people and creating misunderstanding among them," the company said, adding: "We will look into the name, including a rethink of it."

The firm, which makes industrial cooling systems and has offices in China, Singapore, Hong Kong, Malaysia and Taiwan, said the name was nothing to do with the battered Fukushima power station.

The clean-up at the site, where reactors flung radioactive substances into the air, soil and sea in the days and weeks after it was hit by the March 2011 tsunami, has been beset with problems, and continues to come under the spotlight.

A series of leaks of radiation-contaminated water over recent months came on top of a power outage caused by a stray rat, adding to the widely held impression that the plant's operator is hapless.

It is common for companies and organizations in Japan to have a cuddly mascot character that they use as part of branding. Many are brought to life by adults in full-size costumes who wander around sponsored events posing for photographs with children.

In September, Asahikawa Prison in Japan's far north unveiled "Katakkuri-chan," a nearly 6.5-foot humanoid with a huge square face and an enormous purple flower for hair, which bosses hoped would soften the image of the jail.

Tokyo Metropolitan Police has had its own crime-fighting mascot since the 1980s who is now well-loved across the nation.

The use of English, or English-derived words, is also very common in Japan, where despite many years of compulsory language schooling, standards remain relatively low.

This leads to occasional hilarity among visitors to the country, who struggle to understand why someone would drink the unappetizing-sounding Pocari Sweat or the off-putting Calpis.