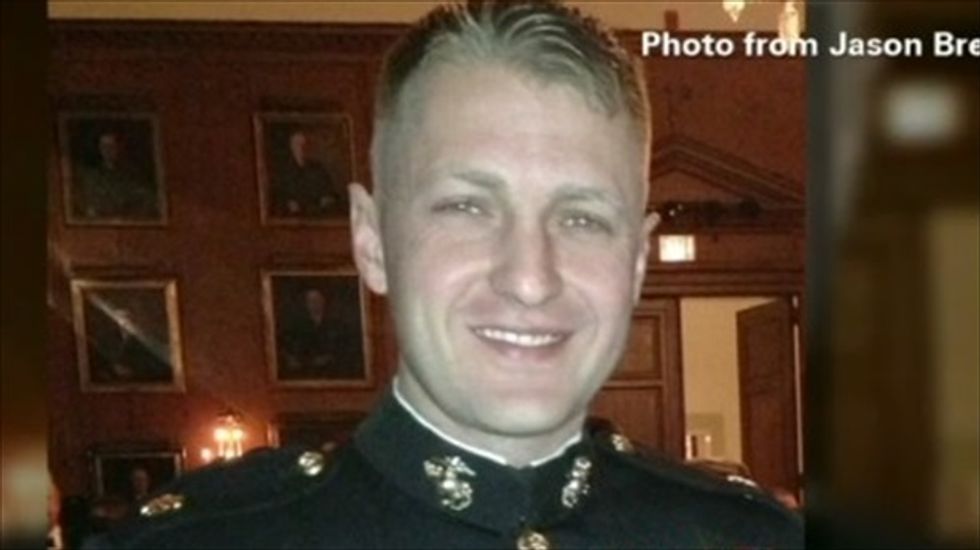 Marine could be discharged for warning troops about child rapist [CNN]

A 13-year Marine Corps veteran has drawn lawmakers' support as he faces the end of his career for using classified information to warn his colleagues serving in Afghanistan about a local police official fired for raping children, CNN reported on Tuesday.

"The only person who's being penalized, or potentially punished, is the person who tried to warn the Marines," Rep. Peter King (R-NY) told CNN in describing Maj. Jason Brezler's case. "I cannot possibly understand it."

Brezler's attorney, Kevin Carroll, told CNN that Brezler turned himself in to superiors in summer 2012 after using classified material to alert troops Forward Operating Base Delhi in Afghanistan about police commander Sarwar Jan, whom he encountered while serving in the country's Helmand province from 2009 and 2010, and had been hired to command Afghan officers in another district. The classified file Brezler sent to Delhi contained allegations that Jan was connected to the Taliban.

"He caused Sarwar Jan, a police official, to be fired from that position because he was raping children," Brezler explained to CNN. "Jason immediately responded with everything he knew, including some extraordinarily derogatory information he knew about this man indicating that he was a threat not only to local children but to Marines."

Less than two weeks after Brezler sent his message, a teen gunman described by CNN as a "servant" of Jan's reportedly shot and killed Sgt. Scott Dickinson, Cpl. Richard Rivera and Lance Cpl. Gregory Buckley inside the gymnasium at the base. Despite his being detained following the shooting, officials in Afghanistan reportedly do not know the whereabouts of Jan or the suspected gunman.

"They all knew that he was a bad guy," Buckley's father, Greg Buckley Sr., told CNN. "He was thrown out of two other bases prior to this for drug laundering, prostitution and ties to the Taliban."

A Corps spokesperson told CNN that because he used classified information in his email to Delhi, Brezler "has been ordered to show cause of retention in the U.S. Marine Corps before a Board of Inquiry." The three-member board can decide between not penalizing him, an honorable discharge, or a less-than-honorable discharge, which would cost him his veteran's benefits package.

King has written the Defense Department asking why Jan was allowed to return to his old position, and whether he used it to commit his crimes. And a Democratic lawmaker, Sen. Kristen Gillibrand (D-NY), contacted the Corps with a letter of her own, saying Brezler "was in a position where lives were in danger and time was of the essence, and in the end his assessment of the threat proved accurate."

Watch CNN's report on the case against Brezler, aired on Tuesday, below.