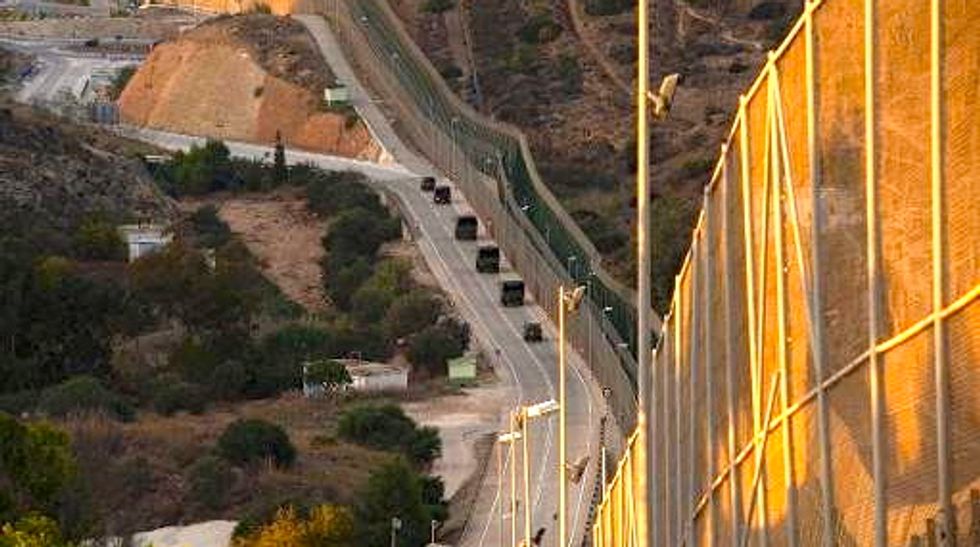 Growing numbers of Africans are taking a daunting test to enter to Europe: leaping a towering, triple-layer security fence and trying to race across before rapid-deployment police guards can catch them.

A vast security operation has failed to deter the would-be migrants attempting to reach the Spanish territories of Ceuta and Melilla, cities that lie on the northern coast of Morocco and offer the only land border between Africa and Europe.

At dawn in Melilla, Spanish Guardia Civil police peer through powerful night-vision binoculars at the 11-kilometer (seven-mile) long, 7-meter (23-foot) high fence that loops around the city until it reaches the Mediterranean coast.

Surveillance cameras watch over the three layers of fencing, which is lit up along its entire length to help spot migrants.

On the other side, plunged in darkness, stands Mount Gurugu where hundreds of African migrants lie in wait for the right moment to make a dash for European soil.

"Every day for the past few months we have seen groups approach. There are quite a few of them and they don't all manage to get up to the fence but there are attempts almost every day," said Non Commissioned Officer Javier Martinez.

"They go barefoot to climb the first fence, then they clear the second, then the third."

On September 17, Spanish security forces were taken by surprise by a night-time assault by about 300 migrants in the Barrio Chino (Chinese District), one of the most vulnerable areas because small buildings near the fence provide hiding places for the migrants.

"The strength of the assault, the large number of people over such a short distance, with so much force, so much violence... it was impossible to contain," said Lieutenant Juan Antonio Martin Rivera, spokesman for the Guardia Civil in Melilla.

Since 2005, the semicircular frontier that encircles this 12-square-kilometer (five-square-mile) city of 80,000 people has been continually upgraded: it has now been strengthened with a raised, third fence equipped with 48 cameras, highly sensitive sensors, and tighter "anti-climb" fence links.

Not going to be stopped by a fence

The exterior fence, the highest at 7 meters, leans outwards at its top to stop anyone clambering over.

"Even so, they manage to climb it," said the Guardia Civil spokesman.

"This is a brake. But someone who has crossed the whole of Africa, who has travelled for months to get here, isn't going to be stopped by a fence."

The Guardia Civil has deployed 600 men at Melilla to confront the migrants.

"Our reaction time is in the order of one-and-a-half to two minutes," the officer said.

"But often a strong, agile young person needs just a few seconds to get over the triple fencing, which looks impenetrable," he said.

Omar Kamara is one of the hundred or so migrants who managed to cross the fencing on September 17 and get to the other side.

At 19, the young Malian left Bamako 15 months earlier "because of the poverty" and, after traveling through Algeria, came to Mount Gurugu.

It was a Tuesday when Kamara crossed the border into Melilla.

"I stayed hidden until Wednesday. Then I met a Spaniard. He gave me something to drink," Kamara said. Then the Melilla resident showed him the way to Ceti, the Spanish government centre for migrants where Kamara is still living.

There are now some 860 migrants crammed into the 480-place centre, which has transformed two large communal halls into dormitories of 100 beds each.

"The migratory pressure has grown over the past two years," says Carlos Montero Diaz, the centre's director, evoking the conflict in Mali and unrest sparked by the Arab Spring revolts.

"They are young, about 22. Their aim is to reach any country in Europe. They leave their families in their countries, hoping to be able to send them money," he said.

"They used to arrive only at certain times of the year when the weather was good. That's no longer the case."

Melilla and Ceuta have been under Spanish rule for centuries but are a stress point in relations with Morocco, which demands Spain cede its sovereignty over the territories.