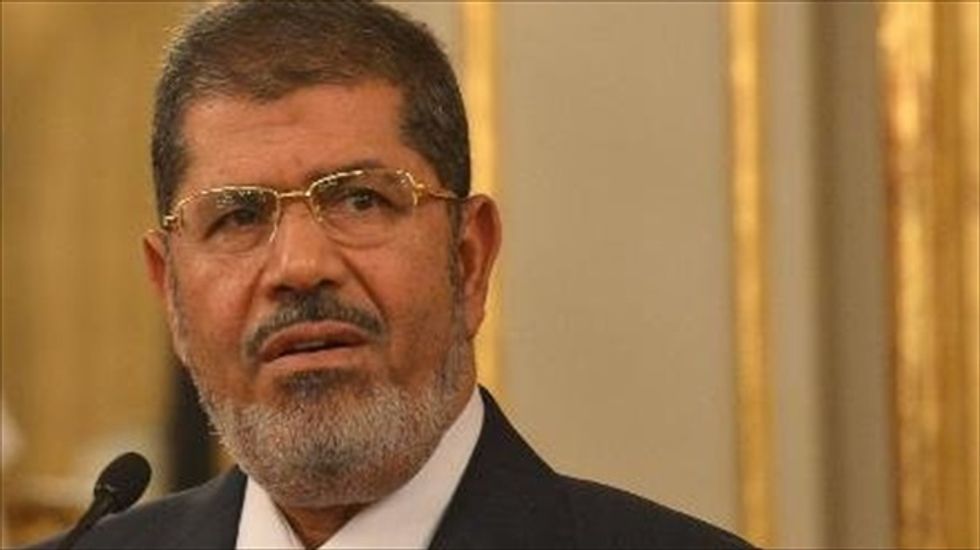 Egypt's ousted president Mohamed Morsi has rejected the authority of the court that is due to try him next week for incitement to murder, his supporters said Monday.

Morsi, an Islamist hailing from the Muslim Brotherhood who was Egypt's first freely elected leader, was ousted by the military on July 3 amid massive protests against his year-long rule.

He is due to stand trial with 14 others on November 4 for incitement to murder in connection with deadly clashes between his supporters and opponents outside the presidential palace in December 2012.

"No lawyers will be defending president Mohamed Morsi, neither Egyptians nor foreigners, because the president does not recognise the trial or any action and processes that result from the coup," the Anti-Coup Alliance, led by the Muslim Brotherhood, said in a statement.

The group said a team of Egyptian lawyers would be attending the trial with Morsi, but only "to observe proceedings, not to defend him."

It said its statement was prompted by false reports in pro-military media outlets saying the Muslim Brotherhood had appointed lawyers from Turkey and Qatar to represent Morsi.

The group called on international human rights activists and lawyers to attend the trial to see first hand "the trampling of justice."

The Anti-Coup Alliance has called for mass protests on the day of the trial, raising fears of further violence in the deeply polarised country.

More than 1,000 people have been killed since Morsi's ouster -- mainly his supporters -- and the authorities have arrested some 2,000 Islamists, including most of the Muslim Brotherhood's leadership.

Morsi himself has been held incommunicado in military custody since his ouster.

The arrests have not deterred Morsi's supporters from organising demonstrations, which have deteriorated into deadly street fights pitting them against opponents and security forces.

Morsi's opponents accused him of poor governance and charged the Muslim Brotherhood with trying to monopolise power following the 2011 overthrow of longtime ruler Hosni Mubarak.

His supporters deny such allegations and point to the Muslim Brotherhood's victories in a series of polls held after Mubarak's overthrow.

Americans are dining out in record numbers as pandemic restrictions lift, with restaurants struggling to keep up with demand amid a labor shortage, data released by review site Yelp showed Tuesday.