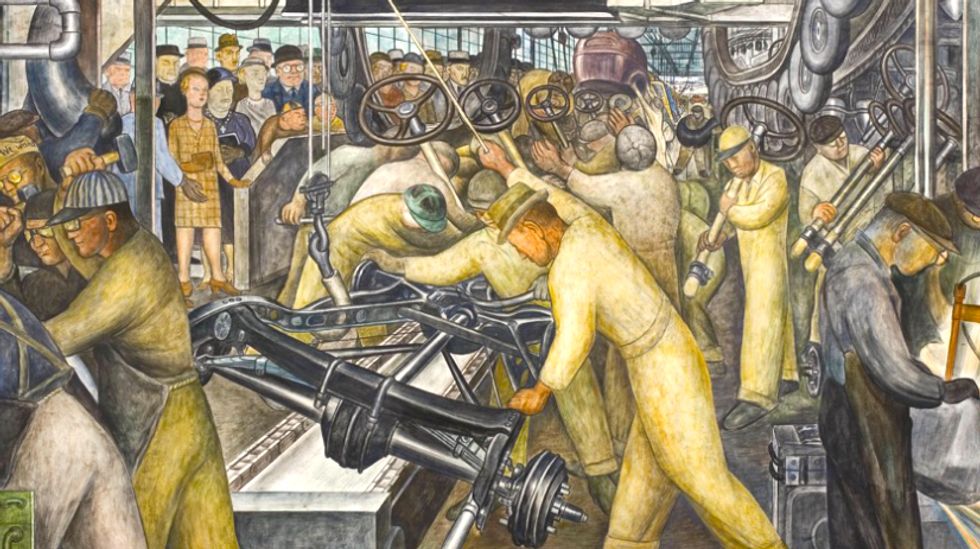 There are few places where the former majesty of the US auto industry is more keenly captured than among the Diego Rivera murals at the Detroit Institute of Arts.

Those stunning, sun-drenched walls could be lost to public view if the museum's collection is allowed to be even partially sold to pay off Detroit's creditors during the city's bankruptcy proceedings.

"Selling art could close the museum."

Founded in 1885, the museum has amassed a world-class collection through the patronage of press barons and auto industry giants.

It was the first American museum to buy works by Van Gogh and Matisse. It has one of just two works by the Dutch master Bruegel that can be viewed in the United States.

There are galleries devoted to African American, Asian and Native American art and others containing modern works by Picasso, Warhol and Rothko.

Rivera's "Detroit Industry" frescos -- a grand vision depicting the benefits and harm of industry and the beautiful complexity of Ford's Rouge plant -- are the heart of the Beaux-Arts temple that draws nearly 600,000 visitors a year.

But, like the Motor City itself, the museum has a troubled history.

The city -- which owns the building and the collection -- stopped providing funds to buy art in the 1950s and eventually withdrew support for daily operations. The state of Michigan stepped in to help fund the museum in the 1980s and early 1990's and then in 1997 a non-profit took over.

The museum finally got on sound financial footing last year when voters in three counties agreed to a new tax that provides $23 million a year to fund its operations.

"Two of those counties have said that if we sell art they will stop the property tax," Erickson told AFP.

"That represents about two thirds of our annual operating budget. If they stop that tax we will be sent into a death spiral."

It could take months or even years for the complex case to make its way through bankruptcy court.

Detroit became the largest US city to declare bankruptcy on July 18. A federal judge will continue to hear arguments next week as to whether it even has the legal standing to do so.

"It's very hard to predict what's going to happen to that art work," said John Pottow, a bankruptcy expert at the University of Michigan's law school.

Michigan's attorney general has issued a formal legal opinion arguing that since the art is held in a charitable public trust it cannot be sold to pay off Detroit's debts.

Even if that opinion does not hold up in court, it could still be argued that selling the artwork is not in the best long-term interests of the city, Pottow told AFP.

But the state-appointed emergency manager leading the city through the bankruptcy is determined to "leverage" the art's value, possibly through long-term leases or using the art as collateral for new loans.

Creditors -- who include city workers and retirees who stand to lose their pension funds -- will certainly argue that the art is an asset which can be sold to fulfill the city's obligations.

Small but vocal groups of protesters have been showing up at public hearings demanding that politicians protect "people before Picasso."

Nevertheless, a recent survey found that 78 percent of Detroiters are opposed selling any of the art work.

That could shift once Christie's auction house completes its appraisal that some have estimated will come in between 10 and 20 billion dollars. Detroit's current debts are estimated to be $18 billion.

Lynn Cookson, who was raised in Detroit and has volunteered at the museum for the past eight years, is among those who will never be convinced that selling the art is in the city's best interest.

"I can't imagine anyone would be foolish enough to gut this place," Cookson said as she nibbled on a cookie in the museum's cafe.

Alphonso Porter, who has worked for the city for decades and expects his pension benefits to be gutted in the bankruptcy, also wants to protect the city's cultural heritage.

“It’s a great place," Porter, 53, told AFP as he headed out of city hall to grab lunch one recent sunny afternoon.

"Detroit needs to keep it if they can."