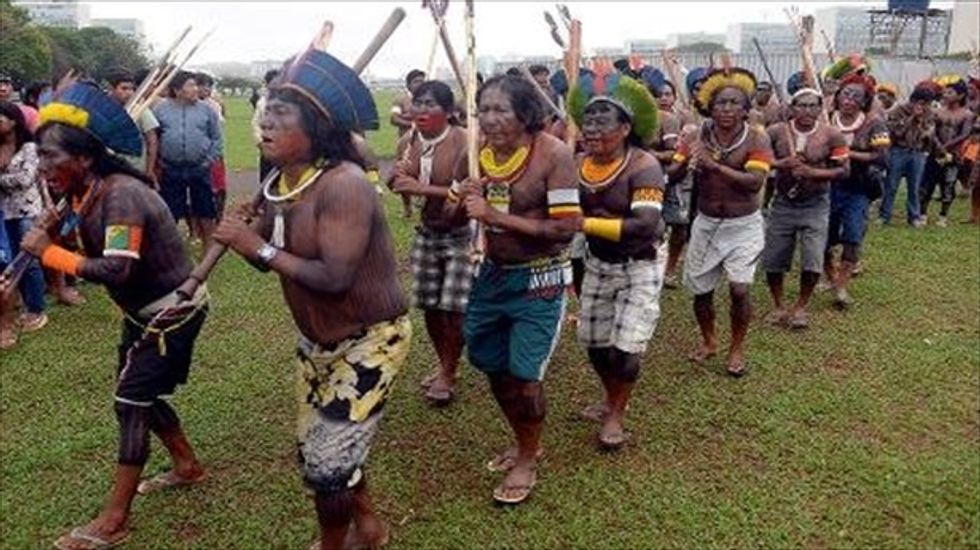 Indigenous Brazilians demonstrate with Greenpeace activists near government buildings in Brasilia on Oct. 1, 2013, to demand more support from the federal government over land rights. [AFP]

Brazil's native tribes and descendants of African rebel slaves protested in Brasilia Tuesday to demand respect of their land rights.

Among the scores of protesters who gathered to hear their leaders air grievances outside Congress were indigenous activists with painted faces and bodies, wearing colorful feather headgear and carrying spears and arrows.

Despite their warrior tradition, the native chiefs stressed that their protest would be peaceful.

"We are here as distinct communities, not to engage in any violence, but to start a dialogue with Congress," said Kayapo chief Raoni. "We are here to voice concern about laws that harm our people."

Takakire, another Kayapo representative, said the protesters were allowed to meet with lawmakers but emerged unsatisfied.

"The main concern of our communities is respect for their lands, which are violated by soybean growers and ranchers," he said.

Indigenous people represent one percent of Brazil's more than 200 million-strong population and occupy 12 percent of the national territory, mainly in the Amazon.

Wealthy ranchers also make up just one percent of the population, but control 46 percent of the cultivated land, and there are frequent land feuds in the Latin American country.

Indigenous militants have been railing against bills that would affect recognition of native lands and authorize mining on them.

The long-simmering protests boiled over in April when leaders of 121 ethnic groups from around Brazil stormed the House of Deputies to demand their rights and accused President Dilma Rousseff of siding with the powerful agribusiness sector responsible for the country's vital farm exports.

"If today Brazil still has a typical staple food, it is because Indians and blacks preserved it," said Nubia de Souza, a spokesman for the National Coordination of Rural Black Quilombo Communities (Conaq).

Quilombos are settlements founded by fugitive black slaves. Today their descendants live in more than 3,000 officially recognized such communities around the country.