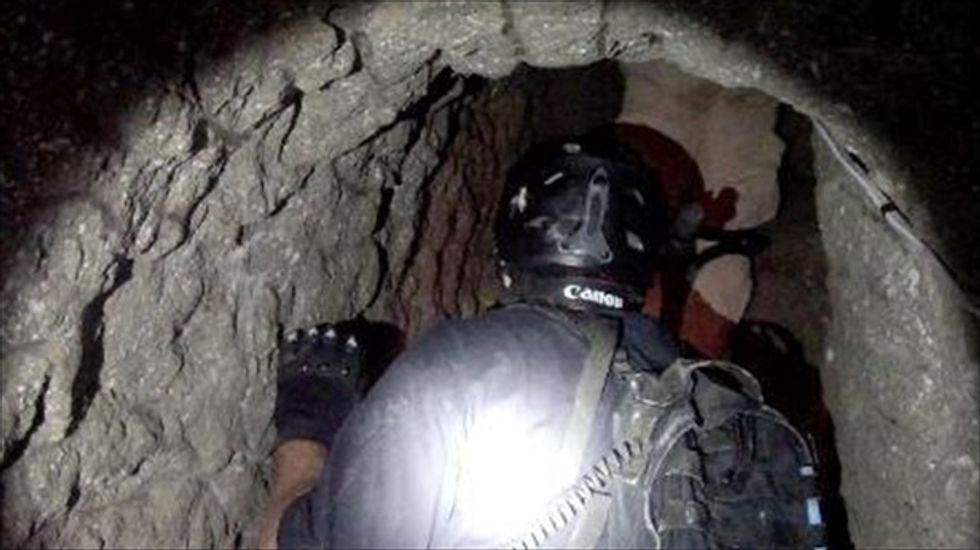 Homeland Security agent enters the interior of the tunnel on Oct. 31, 2013. [AFP]

U.S. and Mexican authorities have unearthed another sophisticated "supertunnel" used to smuggle drugs beneath their common border, the third since 2011, officials said Thursday.

Zig-zagging for a third of a mile beneath the border between San Diego and Tijuana, the newly-constructed tunnel was equipped with an electric-powered rail system to carry the drugs, as well as ventilation.

For the first time, agents seized cocaine intended to be smuggled through the tunnel as well as more than eight tons of marijuana, indicating that Mexican drug cartels are getting increasingly "desperate," they said.

"These cartels are foolish to think they're shoveling under the radar," said US Attorney for Southern California Laura Duffy at a press conference outside the San Diego warehouse where the US end of the tunnel was found Wednesday.

Investigators released video footage of the tunnel, which they stressed was uncovered before it had been been used.

In a message to drug smugglers including notably Mexico's Sinaloa cartel, Duffy vowed: "If you continue to build and attempt to use these tunnels, we are determined to make this a big waste of your dirty money."

Three people were arrested and authorities seized the huge marijuana haul as well as 325 pounds of cocaine, which is usually transported in smaller quantities and does not come through tunnels.

"Their traditional routes are failing at this point. They're very desperate. They'll do anything they can to get into the US," said Bill Sherman, head of the Drug Enforcement Administration (DEA)'s San Diego office.

As with two other "supertunnels" discovered in 2011, agents pounced before it had even become operational. "They did not move one gram of narcotics thru that tunnel," said Sherman.

Law enforcement authorities were increasingly seeing attempts to bring narcotics including cocaine and methamphetamines over the border through tunnels, or micro-light aircraft.

"Those are acts of desperation," he said.

The tunnel was built at an average depth of 35 feet, and was 4 feet high by 3 feet wide, said Derek Benner of the US Immigration and Customs Enforcement (ICE) agency's Homeland Security Investigations (HSI).

Construction likely took a year or more, officials said, adding that it was the work of "engineers and architects." It included hydraulically-controlled steel doors.

Of the three arrested, two were detained in connection with the cocaine seized, and one, a Mexican national, was held over the marijuana haul. All face a maximum of 10 years to life in jail, officials said.

In Tijuana, a Mexican security source said the tunnel was accessed at the southern end by a metal stairway down to a depth of 20 meters, from a building about 80 meters from the border fence.

Discoveries of such underground passageways along the US-Mexico border are not uncommon and authorities say they are used by organized crime groups to traffick drugs and people into the United States.

The tunnel was the eighth large scale such structure discovered since 2006, and the fifth intercepted since 2010.

Over 77,000 people have died in drug-linked violence since 2006, when troops were deployed to battle drug cartels, including under ex president Felipe Calderon and his successor Enrique Pena Nieto, who took office last year.