New York prepares the greatest of pumpkins for Halloween record 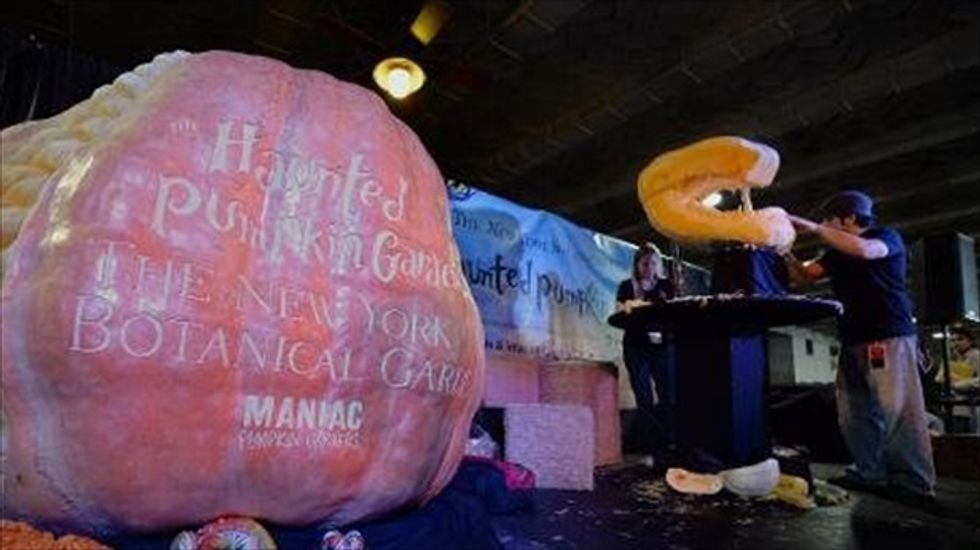 New York is smashing records as it turns the world's largest pumpkin into the centerpiece of a haunted garden sculpted entirely out of the fruit for Halloween.

The record-breaker, which weighs an astonishing 2,032 pounds (922 kilograms) and was grown in California, goes on display Saturday at The New York Botanical Garden.

It and other whoppers grown in Canada and the United States will be transformed into a "Haunted Pumpkin Garden" along with carnivorous plants and other unearthly creatures.

Master pumpkin carver Ray Villafane told AFP he would be working round the clock to create the display, which last year was dismantled early due to Hurricane Sandy.

"It's the biggest pumpkin event here in the US," said the 44-year-old former school teacher, who went professional as a pumpkin carver seven years ago.

"We get to carve the biggest pumpkins in the world. You can't get much better here in New York City, my home town."

Villafane dismissed some complaints that the world-record pumpkin is ugly, saying its deep creases were perfect for being turned into a hive for pumpkin wasps.

The New York Botantical Garden in the Bronx expects around 15,000 people to visit the display this weekend, which will last as long as the weather holds.

Karen Daubmann, who works on exhibitions at the Garden, predicted that Villafane, who has appeared on numerous US television shows, would pull in a big crowd.

"He's pretty popular, so his stuff is going to go viral," she told AFP.

Villafane said the main challenge would be keeping the carved pumpkins held up under their giant weight.

The secret weapon, he said, was a one inch (2.54 centimeter) iron pipe that he hoped would do the trick.