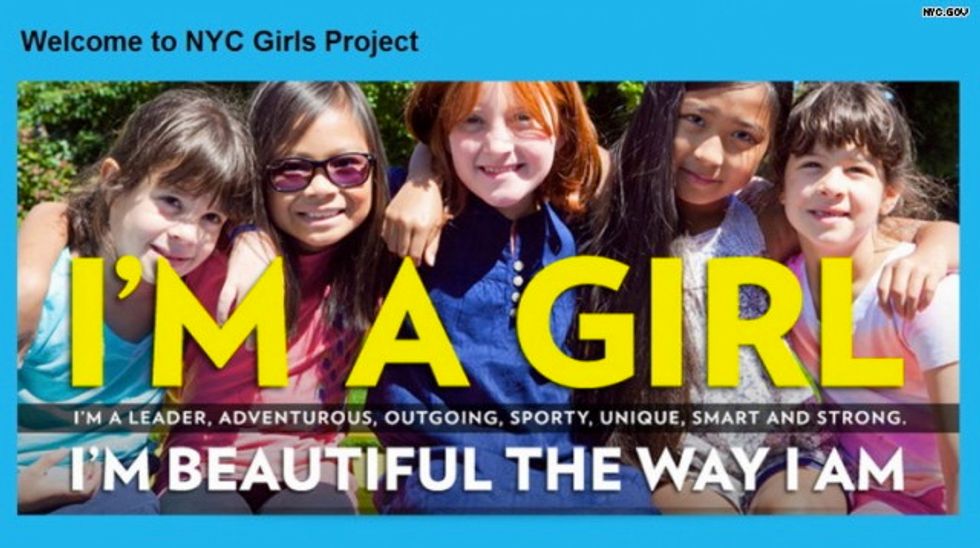 In a city plastered with images of stick-thin models, New York is waging a new campaign to boost self-esteem among girls as young as seven.

Adult women the world over struggle with poor body image, but a publicly funded body-beautiful campaign is trying to tackle the problem, targeting girls as early as elementary school.

More than 80 percent of 10 year old girls are afraid of being fat and by middle school, 40-70 percent of girls are dissatisfied with two or more parts of their body, says City Hall.

Body satisfaction hits rock bottom between the ages of 12 and 15, it added.

But this week the city sought to change all that by putting up posters on buses, in the subway and in phone booths declaring: "I am a girl, I am beautiful the way I am."

The concept is to teach the women of tomorrow that their worth comes not from their appearance, but from their character, skills and attributes.

Fifteen young, smiling girls who are defiantly normal and come from the cross-section of New York society -- white, Latino, African American and Asian -- are fronting the campaign.

They have been photographed playing basketball and chess, or running. One holds a book, another a baseball bat. Several are overweight, others wear braces. One young girl is in a wheelchair.

The quotes vary but all emphasize their qualities.

"I am funny, playful, daring, strong, curious, smart, brave, healthy, friendly and caring," says the caption to a photograph of DeVoray, a sturdy-looking African American of 12 years old.

"I am creative, a leader, smart, daring, tough, loving, astute and outgoing," says another.

Samantha Levine, director of the New York City Girls project, says the campaign will extend later in the month to short videos played in taxis.

"New York City is one of the most diverse cities in the nation with strong, successful women in every area of leadership," said Mayor Michael Bloomberg in launching the campaign.

"Yet girls are struggling with body image issues at younger and younger ages, a struggle that has negative public health consequences including eating disorders, bullying, alcohol abuse, early onset of sexual activity and obesity."

Although 63 percent of girls recognize that the female image pumped out by the fashion world is unrealistic, 60 percent say they compare their bodies to those of models and 48 percent would like to be as thin.

Nearly a third undereat or starve themselves to be thinner, city hall says.

"Our goal is to help girls believe that they are valued for so much more than their appearance, and that they don't need to struggle to meet someone else's idea of beauty," says Levine.

Twanna Cameron, mother of DeVoray, says her daughter thought it was important "to show other girls that they are beautiful just the way they are."

The campaign runs for four weeks on buses and in phone booths, and for eight weeks on the subway. It will be followed by a pilot program in half a dozen schools and at 75 after-school clubs.

Free fitness classes are also being offered to girls.