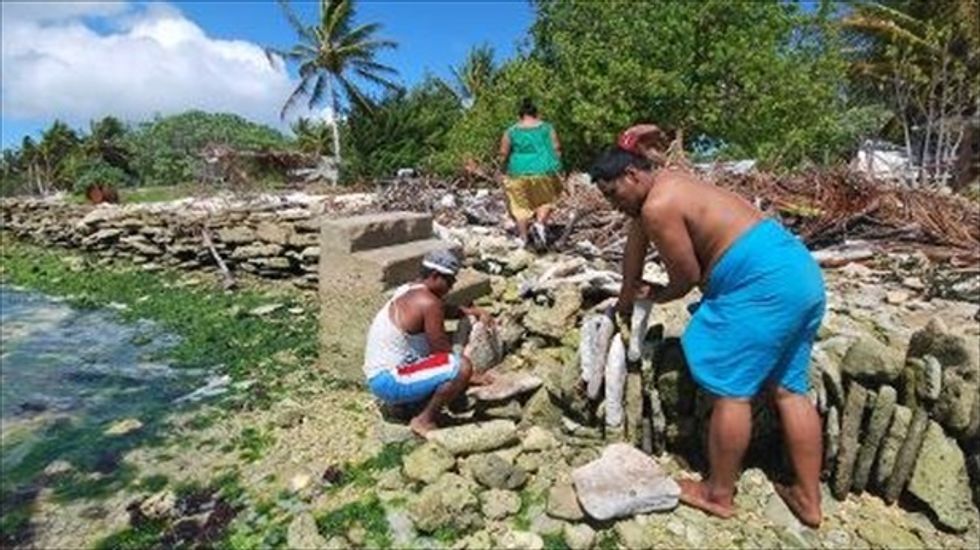 This undated photo, released by the secretariat of the Pacific community (SPC), shows inhabitants of Kiritimati coral atoll building a stone seawall in their struggle against rising seas. [AFP]

Ioane Teitiota, 37, launched an appeal this week against a decision by New Zealand immigration authorities to refuse him refugee status and deport him to Kiribati in the central Pacific, lawyer Michael Kitt said.

Kitt acknowledged Teitiota's New Zealand visa had expired but said he should not face deportation because of the difficulties he would encounter in Kiribati -- which consists of more than 30 coral atolls, most only a few metres (feet) above sea level.

"Fresh water is a basic human right... the Kiribati government is unable, and perhaps unwilling, to guarantee these things because it's completely beyond their control," Kitt told Radio New Zealand.

He said Teitiota's case had the potential to set an international precedent, not only for Kiribati's 100,000 residents but for all populations threatened by man-made climate change.

As the environmental problem worsened a new class of refugee was emerging that was not properly covered by existing international protocols, Kitt said.

"It's a fluid situation, eventually the courts and legislatures are going to have to make a decision on how we deal with this," he said.

Kitt said deporting Teitiota to Kiribati was like forcing a gay person to return to a country where they faced persecution or a domestic violence victim to go somewhere which offered no protection of women's rights.

In refusing Teitiota's application earlier this year, immigration authorities argued that the Kiribati man could not be considered a refugee because no one in his homeland was threatening his life if he returned.

Kitt countered by arguing that the environment in Kiribati was effectively a threat to Teitiota and the three children he fathered in New Zealand, who will have to return with him if he is deported.

"Mr Teitiota is being persecuted passively by the circumstances in which he's living, which the Kiribati government has no ability to ameliorate," he said.

A judge in the Auckland High Court reserved a decision on his appeal on Wednesday and the judgement is expected to be released before the end of the month.