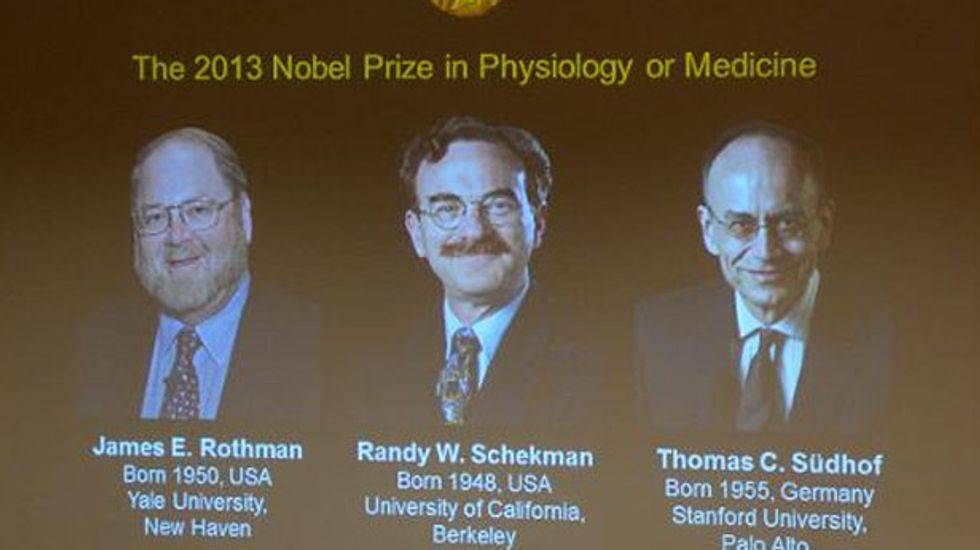 A trio of US and German scientists won the Nobel Prize for Medicine on Monday for pioneering work on the body's cell transport system, unlocking insights into diabetes, immune disorders and other diseases.

James Rothman and Randy Schekman of the United States and Thomas Suedhof of Germany shared the prize for discovering how molecules vital to cellular functioning are shunted around in an internal freight system, tucked inside sacs called vesicles.

They also helped resolve how the vesicles arrive on time and in the right place -- a major riddle, given that this takes place in a microscopic environment humming with movement.

If the package fails to show up at the right time, or goes to the wrong location, this can cause cellular malfunction.

"Through their discoveries, Rothman, Schekman and Suedhof have revealed the exquisitely precise control system for the transport and delivery of cellular cargo," the Nobel panel said.

"Without this wonderfully precise organisation, the cell would lapse into chaos."

Schekman, 64, told AFP he was shocked to get the call from Stockholm: "My reaction when I heard about it was one of disbelief and joy."

"I was completely shocked and surprised," he said in separate comments posted on the Nobel website.

"Almost anyone who receives the Nobel prize has some indirect knowledge of one sort or another that they might be a candidate, so at some level it's not a complete surprise. But that it actually happens is an out-of-body experience," he said.

Three hours after the announcement, the Nobel Committee said it had still not managed to reach Suedhof, 58, to inform him of his prize, and Suedhof himself had yet to acknowledge it publicly.

The trio worked independently on various aspects of the vesicle system, in research spanning three-and-a-half decades.

Schekman began his investigations in the late 1970s, when he became interested in cellular genetics, using yeast as a model for study.

In the 1980s and 1990s, Rothman began studying in greater detail how vesicles are transported in mammalian cells.

"He discovered that a protein complex enables vesicles to dock and fuse with their target membranes," the jury said.

The binding takes place thanks to proteins that fit with each other like the two sides of a zipper.

"The fact that they bind only in specific combinations ensures that cargo is delivered to a precise location," the citation read.

Suedhof's curiosity was initially piqued by how nerve cells are able to communicate with one another in the brain.

In the 1990s, he discovered how the vesicles' contents are released on command -- a vital part of the signalling system within the cell.

The Nobel adds to the trio's long list of achievements.

In 2002, Rothman and Schekman shared the Albert Lasker Basic Medical Research Award, one of the top US science honours. And in 2010, Schekman and Suedhof shared the Kavli Prize for neuroscience.

The three will share equally the prize sum of eight million Swedish kronor ($1.25 million, 925,000 euros), reduced because of the economic crisis last year from the 10 million kronor awarded since 2001.

In line with tradition, the ceremony will take place in Stockholm on December 10, the anniversary of prize founder Alfred Nobel's death in 1896.

Last year, the honour went to Shinya Yamanaka of Japan and John Gurdon of Britain for their work on cell programming, a frontier that has raised dreams of replacement tissue for people crippled by disease.