Obama and Boehner accuse each other of risking U.S. default 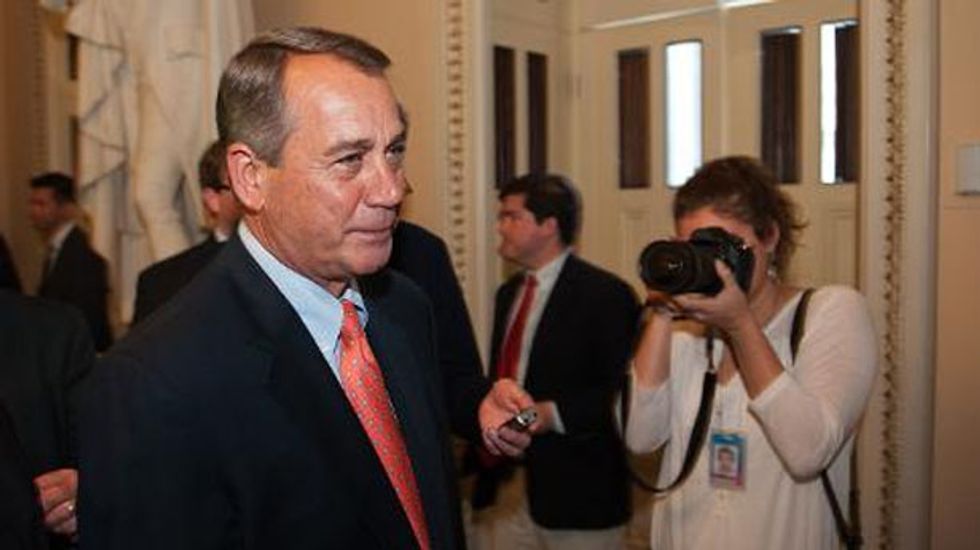 The "terrible" and "unthinkable" threat of a US government default transfixed Washington Monday, as a standoff over raising the debt ceiling surmounted angst over a week-long government shutdown.

Republican House Speaker John Boehner sparked alarm after warning on Sunday that he would not allow Congress to raise the government's borrowing limit by an October 17 deadline unless President Barack Obama climbs down and offers concessions.

The sense of building crisis over Washington's financial paralysis was picked up in China, with Beijing warning that the United States must act quickly to establish the credibility of the dollar, the world's major reserve currency.

Concern also spread to previously calm investors, with the Dow Jones Industrial Average down 89.72 points (0.60 percent) at 14,982.86, mirroring a downward trend on global markets sparked by anxiety over US government paralysis.

"What we're not willing to do is to create a permanent pattern in which unless you get your way, the government is shut down or America defaults," Obama said during a visit to the Federal Emergency Management Agency.

"That's not how we do business in this country. And we're not going to start now.

The US government will be barred from borrowing by October 17 unless the current $16.7 trillion debt ceiling is lifted.

In the resultant chaos, Washington would begin defaulting on its debts, global stock markets could plummet and the fragile world economy could take a hit it can ill afford.

Gene Sperling, Director of the National Economic Council, said Boehner's comments were disappointing and warned Obama could not allow the House of Representatives to hold him hostage over raising the debt limit because it would set a dire precedent for future presidents.

"The president has made clear the era of threatening default has to be over," Sperling said at a breakfast hosted by the Politico news organization.

Obama is refusing to negotiate with Boehner on raising the debt ceiling, saying Congress has a duty to pay bills already run up by lawmakers.

Boehner told ABC News on Sunday that his Republican-controlled House would not raise US borrowing authority without concessions from the White House.

"The president is risking default by not having a conversation with us," Boehner said.

Uncertainty remains over Boehner's true intentions. He had been quoted as saying by anonymous lawmakers in reports last week that he would not allow the United States to go into default.

But Boehner is in a perilous political spot, between the wider interests of economic stability and the radical demands of Tea Party conservatives in his Republican coalition to whom he may well owe his job as speaker.

Obama said he was prepared to negotiate with Republicans on health care, taxes and budget issues -- but only after the government was reopened and the debt ceiling was raised.

Jason Furman, chairman of the president's Council of Economic Advisors, said the consequences of default were "too terrible a thing to even talk about."

On Sunday, US Treasury Secretary Jack Lew warned in an appearance on CNN: "Congress is playing with fire."

China voiced the alarm many foreign governments are feeling.

"As the world's largest economy and the issuer of the major reserve currency in the world, it is important for the US to maintain the creditworthiness of its Treasury bonds," vice finance minister Zhu Guangyao told reporters.

"It is important for the US economy as well as the global economy," Zhu said.

"The clock is ticking."

Concerns over possible default, the second of two political crises that could pummel the US economy, overshadowed concern over the government shutdown, which went into a seventh day on Monday.

The government closed down after Congress failed to pass a new budget for the new fiscal year, turfing federal workers out of their jobs, closing national parks and strangling government services.

No serious negotiations appear to be under way, and there are increasing indications that the standoff will only be resolved in some kind of wider bargain that also includes raising the debt limit.

Republicans have demanded that Obama accept their attempt to defund or delay his trademark health care law in return for reopening the government and raising the debt ceiling.