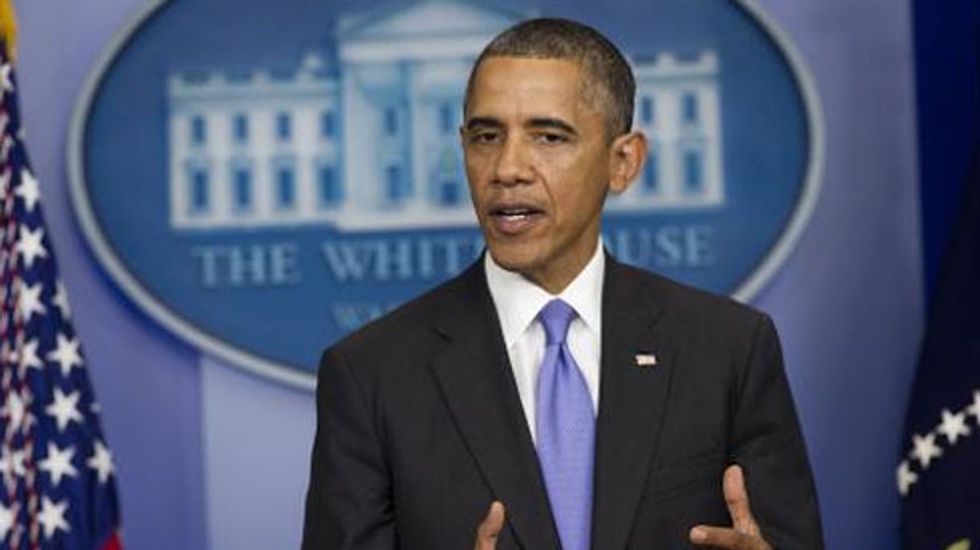 US President Barack Obama launched a fresh effort Thursday to attract investment by foreign manufacturers and other businesses as the government seeks to pull down stubbornly high unemployment.

Obama told a gathering of 1,200 foreign and US business leaders in Washington that his government was creating a high-powered federal inter-agency body to help take care of the needs of foreign investors.

He also said he was raising the priority of attracting investment at US embassies around the world.

"Officials at the highest levels, up to and including me, are going to do even more to make the case for investing in America," he said.

"As a country we don't always make our case in a coordinated way that links our teams overseas to the right senior officials in Washington. And we're going to change that," he said.

Obama said the effort was part of his "top priority" -- to create more jobs -- and argued that the United States remains a choice destination for companies to manufacture for the domestic and export markets.

"I believe there is no better place in the world to do business than the United States of America.... We're not just the world's largest market. We're growing," he said.

"Thanks to the tough decisions we've made to tackle our long-term challenges, America is becoming more competitive from a business standpoint."

Obama said he was expanding the SelectUSA initiative he launched in 2011 to rebuild the US manufacturing sector and pull back jobs that have been bleeding to lower-wage emerging industrial titans like China.

According to a study by the Organization for International Investment, a group of international companies with operations in the United States, the US share of the global pie for foreign direct has been falling steadily in parallel with the rise of the emerging economies.

In 2000 the US took in 37 percent of all inward foreign direct investment around the world. The European Union got 31 percent and developing economies 24 percent.

In 2012, the US share fell to 17 percent, the EU had 34 percent and developing economies 34 percent, according to the OII.

The primary goal of the new effort, said Gene Sperling, director of the White House's National Economic Council, "is to support job creation in the US."

"Our competitors are organizing themselves. We either have to compete better or we'll lose out."

US unemployment has fallen from a peak of 10 percent in 2009 amid the economic crisis to 7.2 percent.

But the number of jobless remains high, with 11.3 million people officially unemployed, and millions more who have given up looking for jobs.

US officials at the conference argued that, wages aside, other aspects of the US make it competitive for those jobs, producing for the US market and for export.

They stressed the country's cheap energy, strong legal environment and huge research and development spending as making the it more competitive for manufacturing.

"Our workers are talented and highly productive. Our entrepreneurs are the most determined and innovative," said Treasury Secretary Jacob Lew.

"We have a deep infrastructure that connects this vast and vibrant market through pipelines, ports, roads, and bridges. And our universities attract and challenge the best and brightest minds from around the globe."

Obama and other officials said they were acutely aware of the bad impression given to foreign and US investors by the 16-day government shutdown in early October and the repeated battles in Congress that have taken the country to the edge of defaulting on its obligations.

"We have to give... a greater sense of stability," Sperling told the conference.

"We want more manufacturing and less manufactured crisis. We haven't been at our best the past month, but I think the future looks brighter."

Raising another political issue, Obama said he was pushing hard to pass a reform of immigration laws that would improve the labor market and hiring environment for foreign investors.

"History shows... when you bet on America, that bet pays off," he told the businessmen.