Obama: The Affordable Care Act is not just a website 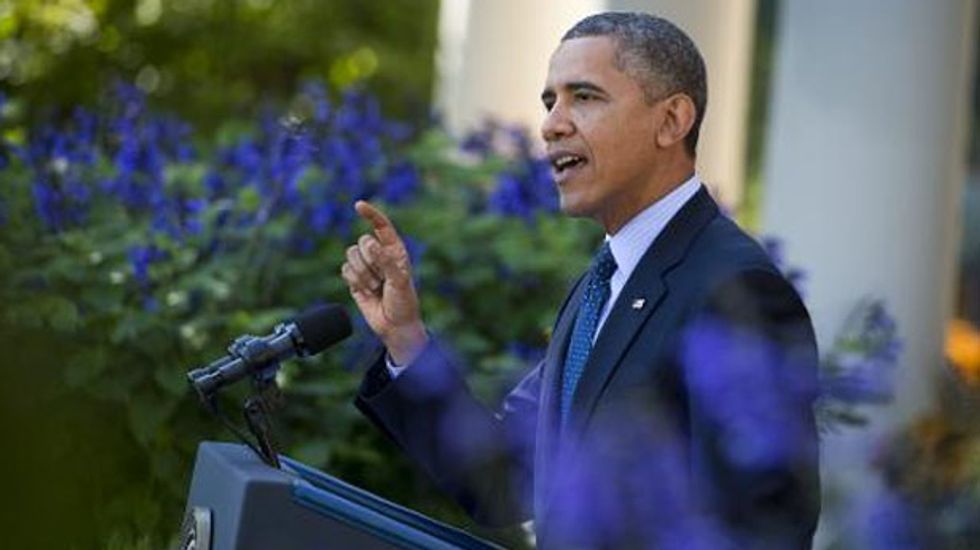 President Barack Obama speaks about the Affordable Care Act in the Rose Garden of the White House on Oct. 21, 2013. Photo via Agence France-Presse.

President Barack Obama said Monday there was "no sugarcoating" the problems clouding the online launch of his health care law, but mounted a firm defense of a system that will help define his legacy.

Obama struggled to assert control over a mounting political storm over the rollout of Obamacare websites, which gleeful Republicans are using to argue the system is fatally flawed and will never work.

"There's no sugarcoating it. The website has been too slow, people are getting stuck during the application process," Obama said in a speech in the White House Rose Garden.

"I think it's fair to say that nobody is more frustrated by that than I am."

Obama spent much of his first-term political capital on a system which is the closest America has ever come to universal health care.

And he was adamant that many people are getting insurance for the first time in years and that Obamacare functions well as a whole.

"Let me remind everybody that the Affordable Care Act is not just a website," Obama said.

"The point is, the essence of the law, the health insurance that's available to people, is working just fine.

"In some cases, actually, it's exceeding expectations," he said, describing malfunctions and delays on the Healthcare.gov website as "kinks."

Obama promised that his administration was doing everything it could to fix website glitches, and had called on some of the country's best computing experts to fix it in a tech "surge."

"Precisely because the product is good. I want the cash registers to work. I want the checkout lines to be smooth," he said.

The president read out a free phone line number for people to register with the site, and argued that the website had been visited 20 million times already.

The White House however refused to give out figures on the number of people who have completed the registration process and bought health care plans in the newly established insurance market places, designed to increase the risk pool of people seeking insurance.

Republicans have pounced on the problems with Obamacare's rollout, arguing that it is a disastrous sign of what happens when the government gets involved in the private insurance market.

While the White House highlights cases of people who have been able to buy insurance for the first time and popular aspects of the law, Obama's foes offer stories of those who have seen existing plans cancelled in the disruption in the health care market caused by Obamacare.

"Obamacare is the nation?s biggest job killer and stands in the way of our country?s economic growth and prosperity," said Ted Cruz, the Republican Senator who campaigned to make a raising of the US government's borrowing authority contingent on defunding Obamacare in a political showdown that ended last week.

"It should be defunded and repealed," Cruz said in a statement.

House of Representatives Republican leader Eric Cantor said that Obamacare's problems were larger than a malfunctioning website and would take more than a "tech surge" to fix.

"The website does serve as stark evidence that the federal government is ill-equipped to centrally manage our nation's health care," Cantor said.

The program, which opened for business on October 1, aims to provide access to medical care for millions of Americans who often are priced out of other health care options.

The federal website serves 36 states, with the 14 other US states managing the system locally with their own websites.

But the websites have struggled with overloads, glitches and crashes, in a big embarrassment for the program and for the president.