Obama to meet with Republicans for government shutdown talks 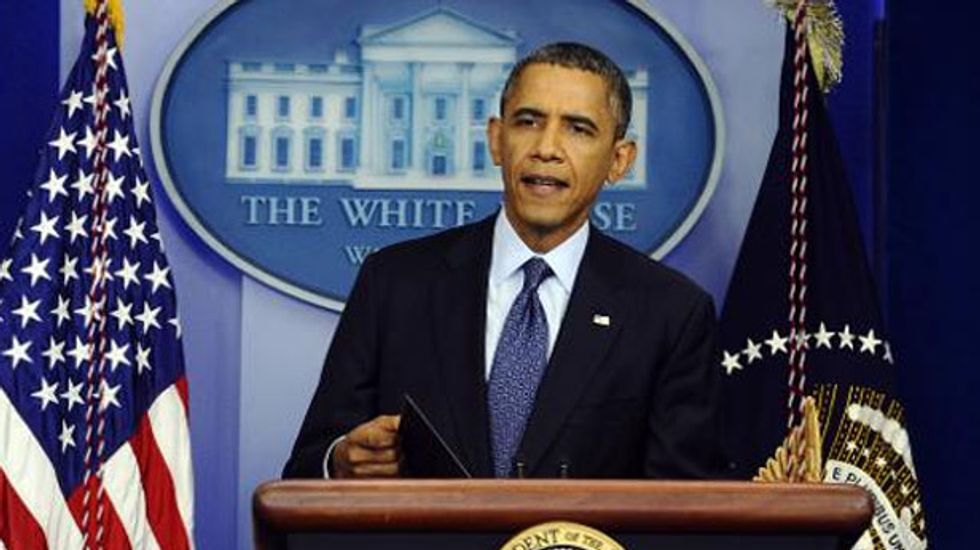 President Barack Obama speaks during a press conference at the White House on Oct. 8, 2013. Photo via Agence France-Presse.

President Barack Obama confronts Republican leaders Thursday, just one week before a toxic political stalemate could take an even more extreme turn and degenerate into a historic debt default crisis.

House Republican chieftains, including Speaker John Boehner, will join Obama at the White House, with neither side yet apparently ready to concede ground in a standoff over a government shutdown and raising America's borrowing authority.

Various scenarios for an exit to the showdown -- including a short-term government funding bill and a temporary debt ceiling rise -- are being floated in Washington, but have yet to develop into a workable exit strategy.

In a sign of the mistrust between the White House and Republicans, the two sides could not even agree on the guest list for the talks in the White House's Roosevelt Room.

Obama invited every Republican House member to the session, part of series of chats with every member of both parties in each chamber of Congress.

But Republicans, charging that Obama had no intention of serious negotiations, said only party leaders, and not the rank and file of their restive caucus, would show up at the White House.

Washington is lurching ever closer to an October 17 deadline to raise the US government's statutory borrowing limit of $16.7 trillion. Failure to do so could see the country default on its obligations for the first time in history.

The Organization for Economic Cooperation and Development (OECD) warned Wednesday that a default could throw most of the world's major economies "back into recession next year" and badly damage emerging nations.

The US government goes into the 10th day of a partial shutdown Thursday, after Congress failed to agree on a budget to finance operations by an October 1 deadline.

Warning he would not be held to ransom, Obama has said he will refuse to negotiate with Republicans on long-term budget issues until the debt limit is lifted and the government reopened.

"You can't threaten to shut down the government as a means of getting leverage in negotiations," Obama told a CBS television affiliate from Virginia, in a series of local television interviews.

Boehner, however, has vowed not to budge until Obama offers concessions.

While both sides are locked into their positions, and no in-depth negotiations are taking place, there were some signs of political maneuvering that could indicate key players are looking for an endgame.

Republicans went into the standoff urging Obama to agree to delay or defund his landmark health care law as a precondition for reopening the government and raising the debt ceiling.

But party leaders are stressing Obamacare attacks less and less, amid an apparent recognition by party leaders that making Obama's top domestic achievement the focus of their campaign has failed.

Republican Paul Ryan, a conservative icon in the House, weighed in on the debate with an op-ed article in The Wall Street Journal, rebuking Obama for not negotiating over the debt ceiling -- saying presidents had repeatedly done so in the past.

But the Wisconsin congressman and 2012 vice presidential nominee also called for a wide discussion about budgetary policy.

While his terms will not impress Democrats, the idea of such a conversation could provide cover for some Republicans to agree to short term measures to stave off the immediate political crisis.

Lawmakers were also chewing over Obama's offer to accept a short-term extension to the debt ceiling and temporary government financing.

Chris Van Hollen, a senior Democratic congressman, said there was a "little glimmer" of hope for a way out.

"It depends on whether Republicans on the Hill are willing to... jump on it," Van Hollen told CNBC television.

It is unclear, however, whether Boehner has the votes within his own party to push forward a short-term solution.

The Republican speaker has been unwilling to rely on Democratic votes to build a majority in the House, apparently fearing a backlash from conservative Tea Party members who could put him out of a job.

Obama, meanwhile, demanded action after learning that relatives of service members killed in Afghanistan since the shutdown began had not received $100,000 in death benefits for each fallen soldier.

The Pentagon said later that a private charity, the Fisher House Foundation, had offered to fund the death benefits and would be paid back when the shutdown ends. And the House hastily voted 425-0 to restore the payments.

"I am offended, outraged and embarrassed that the government shutdown had prevented the Department of Defense from fulfilling this most sacred responsibility in a timely manner," he said.