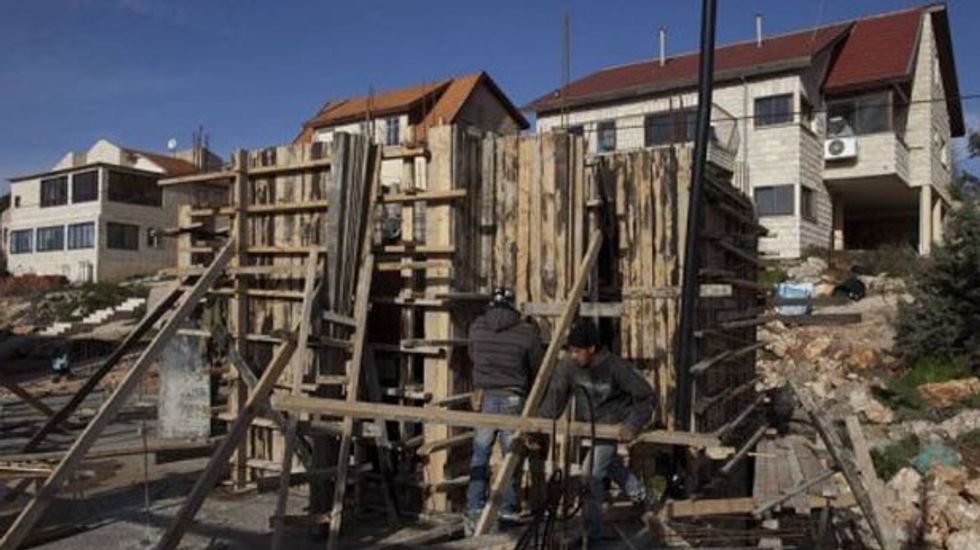 The Palestinians on Wednesday accused Israel of trying to wreck peace talks with plans to build 1,500 new settler homes in east Jerusalem, hours after the Jewish state freed 26 Palestinian prisoners.

A spokesman for Palestinian president Mahmud Abbas, Nabil Abu Rudeina, said the move "destroys the peace process and is a message to the international community that Israel is a country that does not respect international law".

Plans to build the homes in the city's Arab sector emerged in Israeli media almost immediately after Israel began freeing 21 prisoners to the West Bank and another five to the Hamas-run Gaza Strip overnight.

The sequence was almost a mirror image of August 13, when a first tranche of 26 prisoners was freed and Israel announced construction of more than 2,000 new settler homes, mostly in east Jerusalem.

The Islamist movement Hamas, which rules the Gaza Strip, called on Abbas's western-backed Palestinian Authority to break off the talks, saying they encouraged Israeli settlement.

"It is ... the PA's negotiations with the occupation that are now providing (Israel) with a cover for these crimes," Hamas Spokesman Sami Abu Zuhri said in a statement on Wednesday.

In the West Bank, thousands of cheering people turned out to welcome home prisoners, who were tasting freedom for the first time in 20 years or more, in a formal ceremony at Abbas's presidential compound in Ramallah.

After a tearful reunion with their relatives, many of the newly-released prisoners were carried through the crowds on people's shoulders.

"There will be no (peace) agreement if so much as one Palestinian prisoner remains behind bars," Abbas told the excited crowd, referring to the 5,000 or so inmates Israel still held by Israel.

In the northern West Bank village of Burqa, Muayyad Hijjeh, 46, arrived home at 3:30 am (0130 GMT) after serving more than 21 years of a multiple life sentence for the May 1992 killing of an Israeli security guard in the Red Sea resort of Eilat.

Despite the late hour, dozens of locals came onto the streets decked with flags to greet the man they call "the hero of Eilat".

"This is the happiest moment of my life" Hijjeh told AFP. "I feel like someone who was lost in the desert for a really long time and just found water."

In Gaza, the five ex-prisoners were met by hundreds of relatives and well-wishers as they emerged through the Erez crossing and entered the Strip, sparking lively celebrations late into the night.

The move to ramp up settlements was mooted last week by a senior Israeli official who said it had been coordinated in advance with the Palestinians and the Americans.

But Abbas, speaking shortly before the announcement, flatly denied that.

"There are some living among us who say that we have a deal (to release prisoners) in exchange for settlement building, and I say to them, be silent," he said.

All 26 prisoners were convicted of killing Israelis, mostly before the 1993 Oslo accords, which granted the Palestinians limited self-rule but failed to bring about an independent state.

Earlier this year, Netanyahu agreed to release 104 prisoners in stages in a move that facilitated a return to direct talks in late July, ending a three-year hiatus.

The first batch was freed on August 13, and a third release of another 26 inmates is planned for December, Palestinian officials said. The final group is to be freed in March.

The prisoner release has sparked tensions within Netanyahu's coalition, with the premier describing the decision to free them as "one of the most difficult" he had ever made.

Deputy Defence Minister Danny Danon on Wednesday urged the United States to sideline the peace talks in favour of dealing with the Iran nuclear issue as a priority.

Danon, a hardline member of Prime Minister Benjamin Netanyahu's Likud party, said that an agreement with the Palestinians by the target date of May 2014 was "wishful thinking".