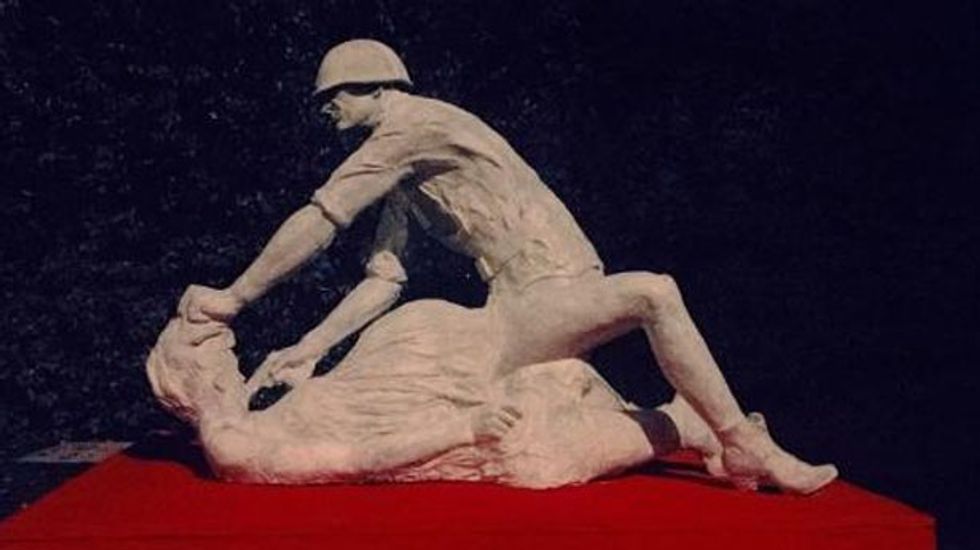 A Polish artist is facing possible charges and has drawn ire from Russia for installing a sculpture of a Soviet soldier raping a pregnant woman in the northern port city of Gdansk.

Szumczyk installed the life-sized sculpture Saturday night to Sunday next to a communist-era memorial hailing the Red Army for chasing Nazi forces out of the city in 1945.

She said a woman upset over the subject matter called police, who determined that it was set down illegally and removed it from the city centre within hours.

Following standard procedure, police turned over the case to prosecutors on Monday and they are to decide by Thursday whether to probe Szumczyk for inciting racial or national hatred.

Russia's ambassador to Warsaw for his part denounced the act on the embassy's website.

"I am deeply outraged by a prank of a Gdansk Academy of Arts student whose pseudo-art desecrated the memory of 600,000 Soviet soldiers who died in the fight for Poland's freedom and independence," ambassador Alexander Alekseyev said Tuesday.

He added that he hoped Polish officials would look into the "vulgar" and "openly sacrilegious" art.

Szumczyk told AFP that the sculpture was an "an expression of pacifism and a signal for peace" that was not specifically directed against the Red Army memorial.

Such memorials regularly provoke outcry in Poland, as they represent not just the city's liberation from the Nazis but also Moscow's half-century reign over Poland during which scores of Poles were killed.

The situation is particularly delicate in Gdansk, which before the war was a free city with mostly German residents and during the war was considered a German city dubbed Danzig.

Most of the women raped by Soviet soldiers in March-April 1945 were German, along with Poles and Russians deported there by the Nazis to work in factories.

Western historians have long written about the atrocities but the subject has never been widely debated in Russia and remains largely taboo.

Stalin and his military commanders are believed to have turned a blind eye to reports of assaults.