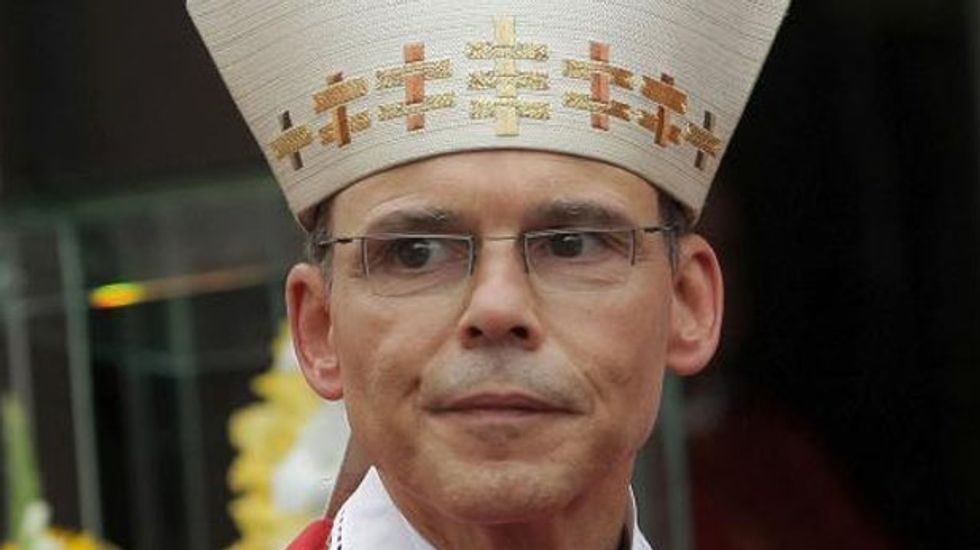 he Vatican on Wednesday suspended indefinitely a German Catholic cleric dubbed the "bling bishop" for his luxury lifestyle, despite multiple calls in Germany for the prelate to be dismissed.

"The Holy See deems it appropriate to authorise a period of leave from the diocese for Franz-Peter Tebartz-van Elst," the Vatican said in a statement.

"The Holy Father has been continuously and objectively informed of the situation," it said.

"A situation has been created in which the bishop can no longer exercise his episcopal duties."

It did not specify how long the bishop would have to stay away but added that this would depend on an analysis of the finances of his Limburg diocese and the responsibilities for its high costs.

The bishop flew to Rome last week with low-cost airline Ryanair to explain himself to Francis -- following accusations he took a business-class ticket on a trip to India and squandered money.

His private quarters in a new diocesan building are reported to have cost some 2.9 million euros ($3.9 million) and included a 63-square-metre dining room and a 15,000 euro bathtub -- using the revenue from a religious tax in Germany.

The reports have caused a scandal in Germany and sparked calls for greater transparency in Catholic Church finances -- a reform aim of the new pope who has called for a "poor Church for the poor".

Asked for a reaction after Wednesday's news, government spokesman Georg Streiter said: "There is no comment from the German government. This is an internal matter for the Church."

The 53-year-old bishop is under fire over the ostentatious building project in the ancient town of Limburg, which includes a museum, conference halls, a chapel and private apartments.

The project was approved by his predecessor and was initially valued at 5.5 million euros but the final bill ballooned to 31 million euros, including a 783,000-euro garden.

Tebartz-van Elst is also accused of giving false statements in court about an expensive flight he took to India to visit poor communities.

Prosecutors say the bishop gave false statements under oath in a Hamburg court battle against news weekly Der Spiegel when he denied having told the magazine's journalist that he flew business class.

Anger that taxes paid to the Church by ordinary Germans are apparently being squandered has led to demonstrations outside his residence.

German Chancellor Angela Merkel, daughter of a Protestant pastor, said earlier via her spokesman Steffen Seibert that "I can express the hope that there will be an answer for believers, for people's confidence in their Church."

Bishop Stephan Ackermann of Treves, in West Germany, last week told Germany's public television chain ARD that the situation has "escalated to the extent that bishop Franz-Peter can no longer on principle work in Limburg."

The embattled Tebartz-van Elst has defended the project, saying the centuries-old cathedral complex adjacent to the modernist new structure is heritage protected, complicating the development.

Critics within and outside the church have contrasted the premium architectural project with the more humble style of Pope Francis and asked how much good the money could do if used as aid in poverty-stricken African countries.

Pope Francis has made several key gestures of a more humble style since coming to office in March and has condemned big-spending clerics.

The pontiff has refused to move into the lavish papal palace in the Vatican, staying instead in the Casa Santa Marta, a residence for visitors.

He has repeatedly called for the Catholic Church and its faithful to rid themselves of earthly concerns like his name-sake, St Francis of Assisi, warning that "worldliness is a murderer because it kills souls, kills people, kills the Church."