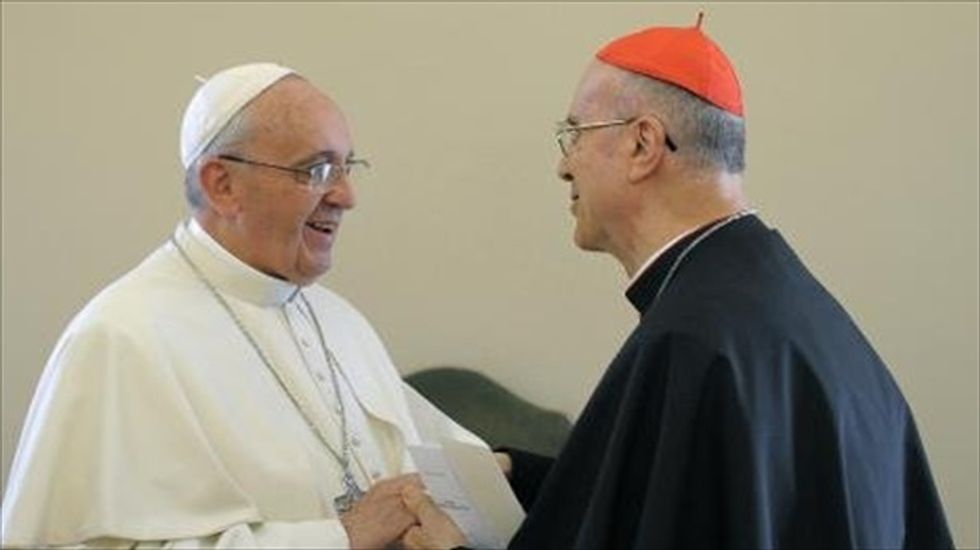 This handout picture released on October 15, 2013 by the Vatican press office shows Pope Francis speaking with Vatican Secretary of State Cardinal Tarcisio Bertone (R) during a farewell ceremony at the Vatican. [AFP]

The Vatican began a new chapter on Tuesday with scandal-hit cardinal Tarcisio Bertone stepping down as right-hand man to Pope Francis and replaced by veteran diplomat Pietro Parolin.

The reform-minded new Secretary of State comes in as Francis mulls an overhaul of the way the Roman Catholic Church is run that could put an end to what the pope calls a "Vatican-centric" system.

The influential post is frequently referred to as the Vatican's equivalent of a prime minister.

Its incumbent can represent the pontiff on some occasions, and three have gone on to be popes.

Parolin himself was not present at the handover ceremony in the Vatican because he is undergoing a "small operation" and will take up his post "in a few weeks", the Vatican said in a statement.

"I would like to thank you for the courage and the patience with which you have lived through all the adversities you have faced. And they are many," the pope told Bertone at the ceremony.

Bertone defended his record, saying: "I see in Pope Francis not so much a revolution but a continuity with pope Benedict XVI despite differences in style and aspects of personal life."

He said he hoped that Parolin could "untie the knots that still prevent the Church from being in Christ at the heart of the world".

Bertone was appointed by Benedict XVI in 2006 and proved a divisive figure who was disliked by many for his management style.

Top clerics had asked Benedict to dismiss the cardinal, accused of being too authoritarian and too connected with sleazy Italian politics.

Bertone's image also suffered because his time in office coincided with a traumatic period for the Vatican, shaken by revelations of widespread child abuse and scandals involving its finances.

Bertone himself lashed out at his critics in September saying he had been the victim of "moles and vipers" in the Vatican system.

"Of course there were a lot of problems, particularly in the last two years, and some accusations were levied against me," Bertone said.

"There was a web of moles and vipers. But this should not darken what I see as a positive overall result.

"We missed some things, also because problems were kept locked away by some people who did not contact the Secretariat of State," he said.

At 58, Parolin is considered relatively youthful for top Vatican office and is the youngest cleric to occupy the post since cardinal Eugenio Pacelli, who went on to become Pius XII in 1939.

Parolin has worked on some of the most sensitive diplomatic issues for the Church, including relations with communist China and with Israel.

Vatican experts said he could also help bolster the Church's international status and give the Secretariat of State a more global outlook.

Parolin was ordained in 1980 and his first foreign posting for the Vatican was in Nigeria in 1986, followed by Mexico in 1989 where he fought to gain legal recognition for the Catholic Church.

In 1992, he was called back to Rome to work for the Secretariat of State and was appointed to a post similar to deputy foreign minister in 2002.

In US State Department cables leaked by WikiLeaks, Parolin was named as a key Vatican go-to contact.

In 2009, he was appointed papal nuncio to Caracas.

Parolin takes over at a time in which the pope is considering a shake-up in the way the Church is governed and a clean-up of its murky finances.

Francis has formed an unprecedented council of eight cardinals from around the world, which held its first meeting this month, to advise him.

In a statement on Tuesday, Francis said that anyone working at the Vatican had to engage in "hard work, professionalism and honest living".