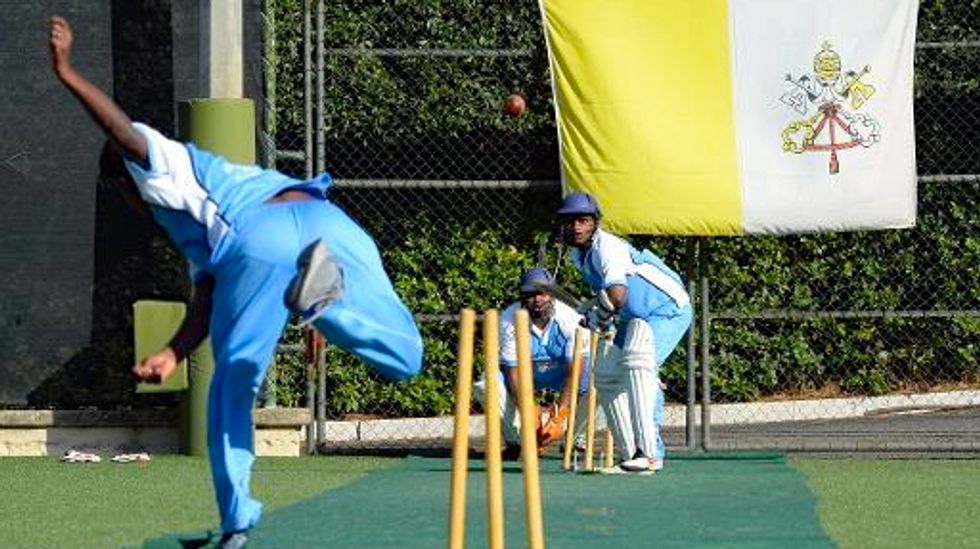 The Vatican served up tea and cucumber sandwiches on Tuesday as it launched its own cricket club, challenging the Church of England to a match and vowing to take on Indian Hindu and Muslim clerics.

With the coat of arms of St Peter's as its symbol and the Vatican yellow-and-white flag as its colours, the club will unite cricket-mad priests and seminarians -- and perhaps eventually nuns.

"The team will be strong enough to beat anyone in the world," said Father Theodore Mascarenhas, an Indian priest and a mean off-spin bowler, who is the chairman of the new St Peter's Cricket Club.

The initiative brings together the sporting madness of hundreds of clerics -- mainly from Bangladesh, India, Pakistan and Sri Lanka -- with a Vatican aim to find new ways to spread the word.

"This represents the council's desire to go to the peripheries of the world that Pope Francis has spoken of," said Monsignor Melchor Sanchez, who is the club's honorary president and an official at the Vatican's Pontifical Council for Culture.

Sanchez said cricket could be a way of engaging with other denominations and religions, saying he hoped the Church of England would form its own team and the two could square off on Lord's cricket ground in London -- the "home of cricket".

The planned "oecumenical" game could be in September next year -- the month chosen because it is a time of holiday for seminarians in Rome.

The club is also thinking of other possible matches against teams of Hindu and Muslim trainee clerics who would come over especially from India.

"I never imagined cricket was so popular in Rome!" said Cardinal Gianfranco Ravasi, who is informally known as the Vatican's "culture minister".

"Cricket is alien to our culture but it has become part of our culture as an expression of inter-culturality," he said, explaining that a wave of immigration in Italy had brought many young aficionados of the sport to the country.

While Pope Francis is known as a fan of the San Lorenzo football club in his native Argentina, Mascarenhas said he was also "a very open man".

"I think cricket is another thing that would be part of that openness," he said, adding: "Cricket will speak a new language -- perhaps Latin."

Various clerics in Rome already play and the plan is to encourage more to join in and to then select a team of the best players by early next year, so as to train together ahead of the Anglican game.

"Any competitive sport implies a battle, overcoming an adversary... A Catholic priest is also called to battle an adversary," he said, adding that "submission to the rules of the game" and "teamwork" were also key for future clerics.

Philippa Hitchen, who works for Vatican Radio, is also a club member in the hope that at some point "we will have nuns playing so the gentlemen's game can also be a ladies' game," Mascarenhas said.

Preparations for the cricket club began a year ago thanks largely to the enthusiasm of Australia's ambassador to the Holy See, John McCarthy, who said this was "sporting diplomacy" in action.

McCarthy said he had heard Pope Francis had "an awareness" of cricket because it was played in the Jesuit colleges in Argentina he once oversaw.

"The Holy Father has heard of cricket," he said.

St Peter's Cricket Club will initially play on the grounds of Capannelle Cricket Club outside Rome and will practice in Trastevere, near the centre.

While the initiative has novelty value, club members said it could also produce genuine talent.

One member is Brother K.M. Joseph, who helped promote sports in schools in India and was behind the rise of former India captain Mohammad Azharuddin and former international V.V.S. Laxman.

Father Robert McCulloch, an Australian priest who works in Pakistan, said: "When it comes to cricket, every Pakistani is a fundamentalist.

He said the Vatican club "brings together many countries and nationalities united by two things -- their faith and their passion for cricket".